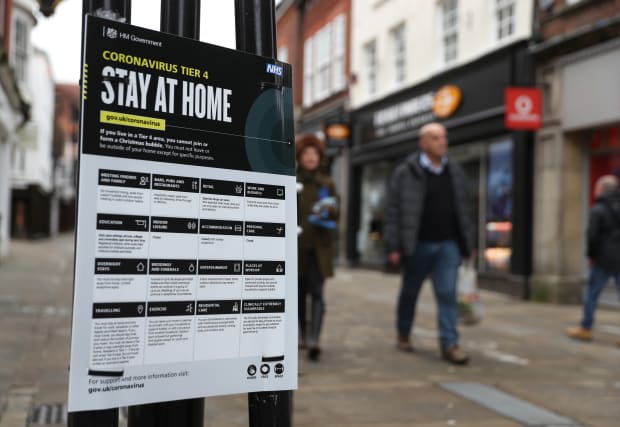 Here is a summary of the changes to the Covid-19 tier levels announced on Wednesday by the Government.

This is 78% of the population of England.

Some 20 million people have been added to Tier 4, in the following areas:

The main restrictions in Tier 4 are:

– No household mixing allowed, though one person can meet one other person outside in a public space
– All non-essential shops and businesses must close, including personal care and indoor entertainment
– Nobody can enter or leave Tier 4 areas
– Residents must not stay overnight away from home

A total of 12 million people will be living in Tier 3 from December 31.

This is 22% of the population of England.

The following areas will move into Tier 3:

The main restrictions in Tier 3 are:

– No household mixing allowed indoors or outdoors, except in parks and public gardens
– All hospitality is closed, except for takeaways and deliveries
– All accommodation and entertainment venues are closed

No areas will be in Tier 2 from December 31.

Just 2,000 people remain in Tier 1 – the population of the Isles of Scilly.

The main restrictions in Tier 1 are:

– The “rule of six” must apply indoors and outdoors
– There must be table service in hospitality venues, with last orders at 10pm and closing time at 11pm
– Large sporting and entertainment events are allowed but with a limited audience.