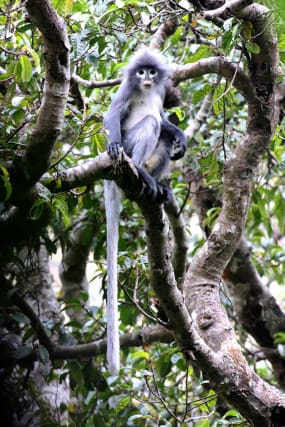 A monkey which lives on the side of an extinct volcano, a lungless worm salamander and red seaweed are among more than 500 new creatures and species that have been identified by Natural History Museum scientists in the past year.

Lichen, wasps and barnacles to minerals, miniature tarantulas and a monkey make up some of the 503 species from almost all kingdoms of life which have been described and studied for the first time.

They are a “remarkable diversity of life forms and minerals” which can be used to help find new species and as a reference point to spot other specimens, according to Dr Tim Littlewood, the Natural History Museum’s executive director of science.

Dr Littlewood said: “Our understanding of the natural world’s diversity is negligible and yet we depend on its systems, interconnectedness and complexity for food, water, climate resilience and the air we breathe.”

Skins and bones that have been in the museum’s collection for over 100 years helped to piece together clues that have brought a monkey, now named Popa langur (Trachypithecus popa), out of obscurity.

Popa langur is named after the mountain in Burma where it is found but it is already a critically endangered species as only 200-260 individuals are left in the wild.

It is hoped that naming this species will help in its conservation.

A lungless worm salamander (Oedipina ecuatoriana), described by the scientists as a “curious” amphibian which breathes through its skin and makes its home by burrowing through the rainforest soil, is another new species.

It was identified via a single specimen which was gathered over a 100 years ago which forms part of the museum’s 80 million-strong collection.

A new parasitic worm from Mauritius called Pseudoacanthocephalus goodmani, which was spotted in the faecal pellets of a guttural toad, travelled to Britain in the luggage of a tourist from Cambridge.

It survived a spin in a washing machine before being noticed.

Reptiles and amphibians, with a crested lizard from Borneo, two new species of frog and nine new snakes are also among the discoveries.

Plants, red seaweeds, ciliates, diatoms and a lichen are also among the newly-described forms in the past year.

These include a delicate-looking seaweed called Corallina chamberlainiae.

It is found in the cold south Atlantic waters off some of the planet’s most remote islands including the Falkland Islands and Tristan da Cunha, revealing a connectivity between these places despite the vast distances that separate the two.

A giant Australian fossil wombat-like marsupial which grew as large as a black bear when it lived 25 million years ago is the biggest of this year’s creatures.

It is dubbed “big bones” from its Aboriginal name of Mukupirna nambensis.

There are 170 new species of beetles, including carab beetles from New Guinea, riffle beetles from Brazil and a minute marsh-loving beetle from Malawi, which have been named.

Another 70 new wasp and three new bee species were discovered.

The Bombus tibeticus bumblebee, which buzzes around the Tibetan Plateau at 5,640 metres above sea level in search of nectar, is among these finds.

Another 51 snail species, both fossil and living, have also been added to the world’s knowledge of creatures.

Many of the living ones are from the deep sea, while the extinct species are helping to show how north western Europe was once a teaming coral sea host to a diversity of life comparable to what is seen in southeast Asia today.

Moths, centipedes, flatworms, a butterfly, moss animals along with 122 new fossil species, such as barnacles, starfish, sea urchins and sea lilies, have also been named by the scientists

There is also a tiny spider that lived alongside the dinosaurs and is now trapped.

A “particularly peculiar creature” is Armilimax pauljamisoni, “a bizarre shell-bearing animal that has been described as an armoured slug”, the museum states.

It is found in rocks dating back to the Cambrian era, some 541-485 million years ago.

A new mineral is called kernowite and its large emerald green crystals came from a closed mine in Cornwall.

Between 100-120 new minerals are described globally every year and “it is even rarer to get some from the UK”, according to the museum’s principal curator of minerals, Mike Rumsey.

The 10 new mineral species which were described this year from all around the world are seen as a significant contribution as there are only around 6,000 known species of minerals.