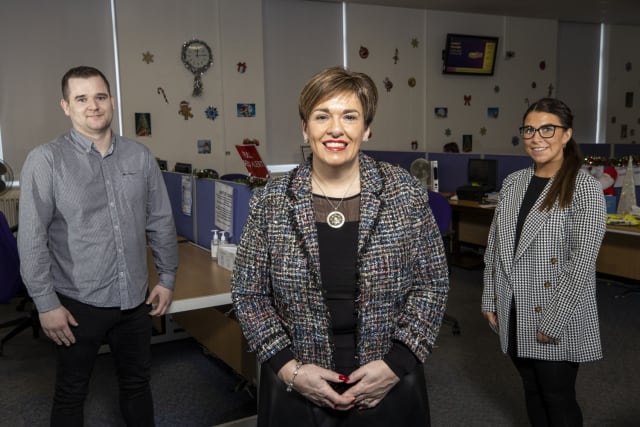 Government briefings have prompted surges in 999 calls during the coronavirus pandemic as demand for emergency services has fallen during traditional peak times.

The manager of the UK’s largest 999 call centre said usual call patterns have been turned on their head in 2020, with Friday and Saturday nights no longer the busiest periods of the week.

Cheryl Stewart, who runs the BT centre in Northern Ireland – which fields one in four of all 999 calls made in the UK – said the highest volumes are now experienced in the minutes after the late afternoon Government briefings.

Ms Stewart said as soon as the broadcasts end the phone lines would be inundated with concerned viewers reacting to comments from Prime Minister Boris Johnson, chief medical officer Professor Chris Whitty and others.

“Certainly at the very start of the first wave the calls coming in were predominantly for the ambulance service and also calls coming in for people looking for advice and reassurance as well,” she said.

“Then, as lockdown continued, the calling patterns or profiles changed. So, instead of getting the usual Friday and Saturday night traffic, where we got the pubs and the clubs, that’s changed dramatically.

“It was the afternoon after the Government briefing every day after 5pm where our calls spiked considerably.”

Ms Stewart added: “From what they had heard on the Government briefing it was perhaps people thinking that they may have had symptoms. So, they were ringing for advice and ringing for reassurance.”

Six BT call centres handle all 999 calls placed in the UK every day. Agents are the initial point of contact and direct the callers to the emergency service they require.

At the start of the first wave, the centres were fielding an unprecedented 105,000 calls on average a day – requiring agents to handle calls every three seconds.

BT trained an additional 100 call handlers across its sites to help deal with the Covid-related spikes.

During one week in March, the Northern Ireland centre received 154,000 calls.

“It’s been a really busy year for us with the impact of the coronavirus,” said Ms Stewart.

“Certainly at the very start in March, the call volumes were very, very high. We were experiencing a high volume of calls going through to the ambulance service.”

Call handlers were classified as key workers from the outset of the pandemic.

Working from home was not an option as it was necessary to remain on site to field calls coming through the high-tech phone exchange system.

The technology includes the Advance Mobile Location (AML) service, which enables call handlers to use mobile phone data to pinpoint the whereabouts of 999 callers.

Agent Regina Livingston said it was difficult balancing the pressures of work with concerns for family at home during lockdown periods.

“We had to come in as our role is vital, being the first point of contact with the emergency services,” she said.

“To do that considering we had family at home, it kind of put us a difficult position dealing with the calls coming in and doing your role and our families at home.”

On the post-Government briefing call surges, Ms Livingston added: “Every call was different, you would have had different callers coming in panic and fear.”

Fellow call handler Paul McShane, who has worked at the centre for 10 years, highlighted the high volumes were coming in at a time when social distancing rules meant fewer agents could work in the same space.

The centre had to repurpose other areas within the building to provide more desk space for handlers.

“We’re used to pressure in this centre, we’re used to it and we’re good at coping with it,” said Mr McShane.

“We had to make sure that everything was still in place even with the pandemic going on.

“We’ve had to expand the centre, we’ve had to make more room, keep two-metre distance but make sure that we’re still here to provide that vital support as the first point of contact for the emergency services.

“If we’re not here, then the 999 emergency services calls won’t be answered.”