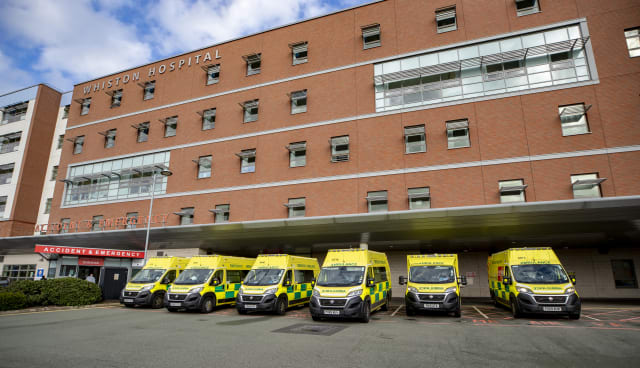 England’s hospitals now have more Covid-19 patients than during April’s first-wave peak as a health boss warned doctors and nurses are “back in the eye of the storm.”

NHS England figures show there were 20,426 patients in NHS hospitals in England as of 8am on Monday, compared to the 18,974 patients recorded on April 12.

The number of further lab-confirmed cases of coronavirus recorded in a single day in the UK also hit a new high of 41,385 as of 9am Monday, rising above 40,000 for the first time, according to Government figures.

Cases figures do not include information from Scotland and Northern Ireland, which did not report data between December 24 and 28, meaning the true number is even higher.

Sir Simon Stevens, the chief executive of NHS England, said: “Many of us have lost family, friends, colleagues and – at a time of year when we would normally be celebrating – a lot of people are understandably feeling anxious, frustrated and tired.

“And now again we are back in the eye of the storm with a second wave of coronavirus sweeping Europe and, indeed, this country.”

He said a “chink of hope” lay in the various Covid-19 vaccines, with the Oxford/AstraZeneca jab expected to be approved imminently by the Medicines and Healthcare products Regulatory Agency, according to reports.

Sir Simon said: “We think that by late spring with vaccine supplies continuing to come on stream we will have been able to offer all vulnerable people across this country Covid vaccination.

“That perhaps provides the biggest chink of hope for the year ahead.”

But the current vaccination target will have to be doubled to two million jabs a week to avoid a third wave of the virus, according to a projection from a London School of Hygiene and Tropical Medicine paper reported by the Telegraph.

Calum Semple, professor of outbreak medicine at the University of Liverpool and a member of the Scientific Advisory Group for Emergencies (Sage), described the Oxford/AstraZeneca vaccine as a “game changer” but warned “herd immunity” through vaccination would not be likely until the summer.

It comes as hospitals struggle to cope with the surge in coronavirus patients, while trusts have been told to begin planning for the use of Nightingale hospitals.

Dr Yvonne Doyle, medical director at Public Health England, said: “This very high level of infection is of growing concern at a time when our hospitals are at their most vulnerable, with new admissions rising in many regions.”

Saffron Cordery, deputy chief executive of NHS Providers, said some trusts are reporting up to three times the number of Covid patients than at the peak of the first wave.

“This means hospitals and also ambulance services in Tier 4 areas and beyond are incredibly busy, compounded by increasing staff absences due to illness and the need to self-isolate,” she said.

Dr Nick Scriven, immediate past president of the Society for Acute Medicine, called the trend “extremely worrying” and said “systems will again be stretched to the limit”.

Paramedics in the capital are receiving support from other ambulance services in the South as they receive up to 8,000 999 calls each day.

London Ambulance Service described Boxing Day as one its “busiest ever days”, with 7,918 callouts – up more than 2,500 on the 5,217 received on the same day last year.

The South Central Ambulance Service (SCAS) said it is “prewarning” the military and fire service that paramedics may need help after an average increase of 10% in 999 calls over the Christmas period and a threefold increase in 111 calls, along with a 60-70% increase in absence rates with staff symptomatic or self-isolating.

The Government said a further 357 people have died within 28 days of testing positive for Covid-19 as of Monday, bringing the UK total to 71,109.

Meanwhile, an outbreak of further positive Covid-19 cases at Manchester City led to their Premier League trip to Everton being postponed just four hours before kick-off on Monday night.

More than six million people in east and south-east England went into the highest level of restrictions on Saturday, which now affects 24 million people representing 43% of the population.

Lockdown measures are also in place across the other three home nations, after mainland Scotland entered Level 4 restrictions from Saturday for three weeks, and a similar stay-at-home order is also in place in Wales.

Northern Ireland has also entered a new six-week lockdown, and the first week measures are the toughest yet, with a form of curfew in operation from 8pm, shops closed from that time and all indoor and outdoor gatherings prohibited until 6am.