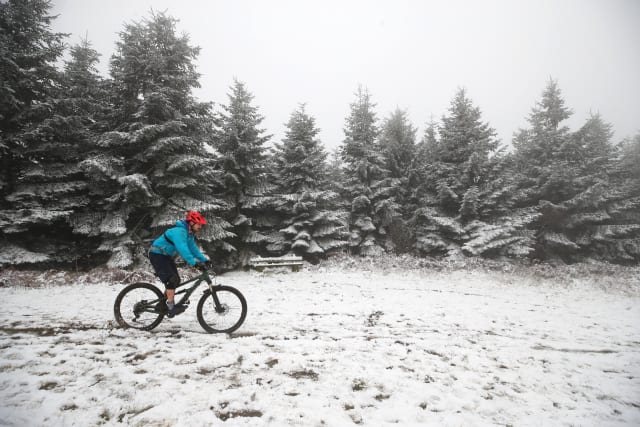 Drivers have been urged to stay off the roads after heavy snow fell in some parts of the country.

With more cold weather in store on Tuesday, the Met Office has issued a yellow warning of snow and ice for much of England and Wales and parts of Scotland.

Treacherous conditions were also predicted if thawing snow turns to ice overnight, according to the AA, which warned drivers to be prepared if they had to make journeys.

Forecasters said another 10cm of snow could fall over the Pennines with further wintry showers expected.

The warning is in place from 6pm on Monday and runs until 10am on Tuesday.

Ben Sheridan, of the AA, said: “Thawing snow, rainfalls and freezing temperatures overnight lead to challenging driving conditions, with roads likely to be icy in the morning.”

But the AA added regional restrictions which have been imposed due to Covid-19 means that roads are quieter than normal.

Large swathes of London, the Midlands, the South, South West plus the east of England and Wales have also been warned that snow and ice could hit on Wednesday and Thursday.

The Met Office yellow warning suggests that up to 2cm-5cm of snow could fall across parts of southern Wales, central and southern England, and there is a small chance of 10cm-15cm settling in a few places, most likely on high ground above 200 metres.

Yellow weather alerts for snow and ice were in place across much of England and Wales during “a cold and frosty” start to Bank Holiday Monday.

Stoke-on-Trent City Council sent out snowploughs to help clear routes after the light flurries it had expected instead resulted in three inches of snow coming down.

Heavy snowfall prompted Gloucestershire Police to warn members of the public to take care and to “only go out if it is essential to do so”.

The force tweeted: “Heavy snow is starting to fall in the rural parts of the county. This will cause delays on the roads.”

It had a number of reports of snow around the county causing disruption, which was hampering people in the Forest of Dean and the A417 around Birdlip.

A large number of vehicles had been stranded, South Staffordshire Police said.

In the West Midlands, Dudley Zoo said it would be closed on Monday due to the snow.

The football match between Kidderminster Harriers and AFC Telford United was called off as snowfall had meant that many of the surrounding areas were unsafe.

Chilly conditions saw temperatures drop to -2.9C in Aboyne in Aberdeenshire, Scotland, on Sunday, while St Mary’s just off the Cornish coast had the top temperature of 8.5C.

It comes after days of wintry weather over the Christmas period which brought flooding to parts of southern England before Storm Bella arrived on Boxing Day with winds of more than 100mph.

Flooding was also reported in parts of eastern England by Sunday morning, with kayakers taking to the roads in Norfolk in an attempt to traverse waterlogged streets.

Despite the bad conditions, gales meant that for the first time ever, more than half of Britain’s electricity was generated by wind power on Saturday.

According to energy firm Drax, 50.67% of the country’s power was produced by wind turbines on Boxing Day.