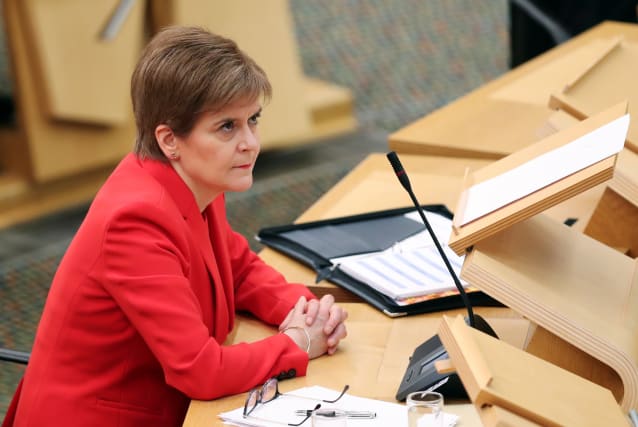 The UK Government is "forcing" Scotland in the "wrong direction" with Brexit, Nicola Sturgeon has insisted.

The Scottish First Minister, speaking as the deal on the future relationship between the UK and the European Union (EU) was published, complained that promises made to the country's fishing sector had been "broken".

She also insisted it was "extraordinary" that Prime Minister Boris Johnson had decided to "inflict a hard Brexit" on the UK in the midst of the coronavirus pandemic and resulting recession.

Ms Sturgeon spoke out on the issue after the Scottish Government warned the agreement reached by the Prime Minister could cost Scotland £9 billion by 2030.

Scottish Secretary Alister Jack insisted the UK Government had struck a "fantastic deal", as he added that coastal communities would be able to "thrive outside the EU's unfair Common Fisheries Policy".

His comments came after analysis by the Scottish Government indicated GDP could be reduced by about 6.1%, compared to staying in the EU.

With Scotland having voted to stay in the EU in the 2016 referendum, Ms Sturgeon stressed that Brexit was happening "against the wishes of most people in Scotland" and said it would "hit jobs and living standards at the worst possible time".

Writing in The Times newspaper she said: "An extension to the present arrangements with the EU was on offer earlier this year but the UK Government refused it.

"And while no deal would have been worse, Mr Johnson's deal spells short-term disruption and long-term barriers."

The Scottish First Minister claimed that as a result of the new arrangements "our people will be less safe and they will lose their right to work, study and live elsewhere in Europe".

She continued: "We are to be taken out of the EU's single market. Promises made to our fishing communities have been broken."

Ms Sturgeon insisted that leaving the EU was "yet another example of Tory governments forcing Scotland in the wrong direction".

But she said if Scotland became independent and was able to rejoin the trading block it could be a "bridge-builder between the UK and the EU".

The Scottish Government fears that lamb and beef exports will be hard hit by the extra costs of exporting to the EU after December – when the current transition period ends.

Meanwhile businesses trying to access EU markets will face additional bureaucracy and costs, with the Scottish seafood sector requiring new certificates and changes to business practices to continue to export to the EU.

On the key Scottish fishing industry, the Scottish Government fears the fleet north of the border will only see a fraction of the additional quota promised.

Another concern raised by Scottish ministers is that justice and security co-operation could be seriously impacted.

But Mr Jack insisted that after "a long and tough negotiation" with the EU, the UK had "secured a fantastic deal".

Writing in The Times he said: "This is great news for Scottish businesses and families.

"Having delivered a deal for the whole of the UK in record time, there are opportunities ahead. It is the first time the EU has ever agreed a zero-tariff, zero-quota deal, giving Scotland's businesses exceptional access to the EU."

The UK Government minister continued: "Our agreement will ensure that our coastal communities will thrive outside the EU's unfair Common Fisheries Policy.

"We will invest in our fishing communities and restore the fleet so our fishermen can catch more fish. The Scottish fish processing sector will benefit from tariff-free access to EU markets.

"Products from Scotch whisky to Orkney cheddar will be protected in the EU. And the deal meets the UK's commitment to high standards, reflecting the importance that we place on being a leader in quality and standards."

He said: "This is a historic moment for all of the UK. It's time for us to come together and make the most of the new opportunities."