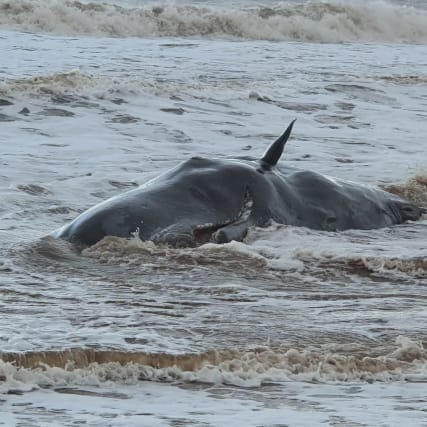 Coastguards have warned members of the public to keep their distance from the bodies of a number of whales that died after becoming stranded on the East Yorkshire coast.

Teams from Hornsea and Withernsea have been conducting safety patrols throughout Christmas Day and Boxing Day to give safety advice to people about the health risks of touching and climbing on the deceased animals.

Ten sperm whales died after becoming stranded on the beach between Tunstall and Withernsea on Christmas Eve morning.

On Saturday, the Hornsea Coastguard said the bodies of some of the whales had now been washed out to sea.

In a message on social media, the Coastguard said: “Teams from Hornsea and HM Coastguard Withernsea have provided safety patrols over Christmas Day and Boxing Day in response to the mass stranding of multiple sperm whales on Christmas Eve between Tunstall and Withernsea.

“Coastguards have been providing safety advice to members of the public and obtaining key information for other organisations involved in the investigation to the cause of the stranding.

“Please be careful along cliff edges, be aware of tide times trying to get photos and the risk of touching and getting close to the deceased whales.

“A number of them have naturally been washed out to sea over the last few tides.

“Be mindful of the health risks as they now start to decompose, where harmful bacteria, fluids and other associated health hazards will be present.

“Do not attempt to climb on them and listen to advice from the coastguard.

“This is for your safety.”

British Divers Marine Life Rescue (BDMLR) was called out, along with coastguards and police, after people noticed some of the huge animals on the beach on Thursday morning.

They later confirmed that 10 of the whales had died.

A BDMLR spokeswoman said the North Sea was a difficult environment for sperm whales as the shallow water had few of the deep water squids they usually fed on, and they rarely survived beach strandings due to their size.

She said photographs of the animals, believed to be a pod of juvenile males, would be shared with the Cetacean Strandings Investigation Programme, UK Strandings and it was now the responsibility of the council and beach owners to plan what happened to the bodies.