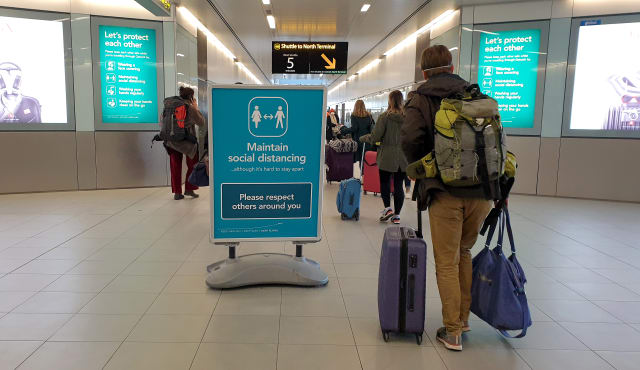 Canada has confirmed its first cases of the new highly infectious variant of Covid-19 that was first detected in the UK.

It comes after cases were confirmed in countries across Europe including France, Spain, Denmark, Italy, Iceland and the Netherlands, as well as various reports of the variant around the globe in Australia, Japan and Lebanon.

With reported cases in Switzerland and Sweden, it means the variant has potentially spread to at least 10 countries outside of the UK.

Dr Yaffe said the cases in Canada are a couple from the Durham region with no known travel history, exposure or high-risk contacts.

Both individuals have been informed and are in self isolation.

She said: “This further reinforces the need for Ontarians to stay home as much as possible and continue to follow all public health advice, including the province-wide shutdown measures beginning today.”

On Friday, French authorities confirmed a Frenchman living in England arrived in France on December 19 tested positive for the new variant, while health authorities in Spain said the variant was detected in four people after an infected person flew into Madrid’s airport.

The news follows the first shipments of coronavirus vaccines arriving across the European Union, including in Ireland where they were welcomed as a “great hope”.

Boxing Day sales looked to have suffered a sharp decline after Tier 4 measures came into effect on Saturday in large parts of England, with people ordered to “stay at home”.

New lockdown measures also came into effect in Scotland and Northern Ireland, forcing non-essential shops to shut, while restrictions were reimposed in Wales on Saturday after they were eased for Christmas Day.

By midday, footfall was down 60% across the UK compared with last year, according to retail experts Springboard, and shoppers are expected to spend £1 billion less.

However, shoppers in lower tier zones queued for bargains in the early hours of the morning, with around 200 people waiting in a socially-distanced queue by 5.50am outside Next in Leicester, which is under Tier 3 restrictions.

It comes as the Government announced a further 210 people died within 28 days of testing positive for the virus as of Boxing Day, while there were a further 34,693 lab-confirmed cases of coronavirus in the UK.

Meanwhile, congestion continued to ease at the Port of Dover and Eurotunnel on Boxing Day after thousands of drivers spent spent Christmas Day stuck in nearly a week-long of queues.

Transport Secretary Grant Shapps said 15,000 lorry drivers had been tested for coronavirus by midday on Saturday, and the backlog at the testing site at Manston Airport had cleared.

However, it drew some criticism for going ahead, with Labour decrying the decision as “one rule for the Conservatives and their mates, another for everybody else”.

More than six million people in east and south-east England went into the highest level of restrictions, which now affects 24 million people representing 43% of the population.

Areas that moved to Tier 4 are Sussex, Oxfordshire, Suffolk, Norfolk and Cambridgeshire, parts of Essex not yet in the highest tier, Waverley in Surrey and Hampshire, with the exception of the New Forest.

Bristol, Gloucestershire, Somerset including the North Somerset council area, Swindon, the Isle of Wight, the New Forest and Northamptonshire, as well as Cheshire and Warrington, were moved to Tier 3, while Cornwall and Herefordshire moved from Tier 1 to Tier 2.

Mainland Scotland entered Level 4 restrictions from Saturday, with the Scottish Government intending the increased measures to last for three weeks.