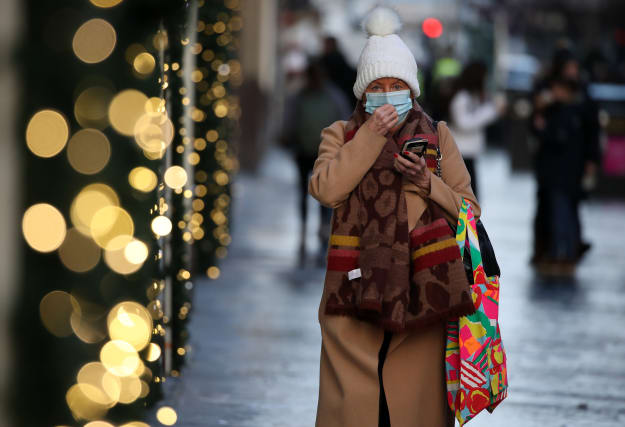 Millions more people will be waking up to harsher coronavirus restrictions on Boxing Day when new tier changes come into force in England.

New lockdowns are set to be introduced in Scotland and Northern Ireland, while restrictions that were eased for Christmas Day in Wales will be re-imposed on Saturday.

Those in the strict Tier 4 in England will increase by six million to 24 million people, representing 43% of the population, in response to a more transmissible variant being discovered in the UK.

It comes after the Government said a further 570 died within 28 days of testing positive for the virus as of Christmas Day, while there were a further 32,725 lab-confirmed cases of coronavirus in the UK.

The Queen delivered a heartfelt message of hope to the country in her Christmas address, praising the “indomitable spirit” of those who have risen “magnificently” to the challenges of the pandemic.

In her annual televised speech, the Queen paid tribute to the “kindness of strangers” whose actions have inspired all and, sounding a positive note, said even the “darkest nights” have a promise of a “new dawn”.

Meanwhile, the Archbishop of Canterbury used his Christmas sermon to praise schools and hospitals for bringing hope during the coronavirus crisis.

Transport Secretary Grant Shapps said more than 10,000 tests have been carried out on lorries drivers waiting to cross the English Channel into France, of which 24 returned a positive result.

Some 1,100 military personnel have been deployed in Kent as part of the operation, after French Covid-19 restrictions caused severe disruption at the Port of Dover.

Areas moving to Tier 4 are Sussex, Oxfordshire, Suffolk, Norfolk and Cambridgeshire, parts of Essex not yet in the highest tier, Waverley in Surrey and Hampshire, with the exception of the New Forest.

Bristol, Gloucestershire, Somerset including the North Somerset council area, Swindon, the Isle of Wight, the New Forest and Northamptonshire, as well as Cheshire and Warrington, will all be escalated to Tier 3.

Elsewhere, Cornwall and Herefordshire move from Tier 1 to Tier 2.

Mainland Scotland will enter Level 4 restrictions from Saturday, with the Scottish Government intending the increased measures to last for three weeks.