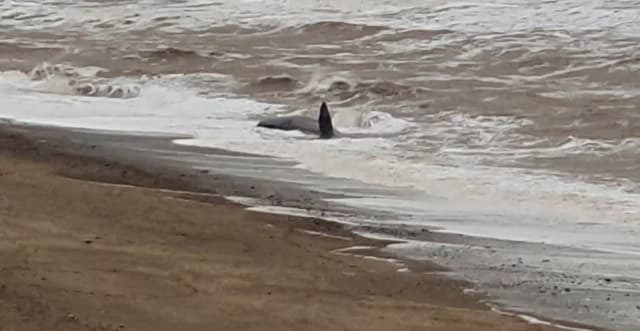 A group of whales have been washed up on a beach in East Yorkshire.

Humberside Police said the seven animals have been beached on a stretch of coastline between the villages of Tunstall and Withernsea.

They said the Coastguard and British Marine Life Rescue were helping with the situation.

The force said in a tweet: “Coastguard are currently dealing with seven whales that have sadly washed up on the beach, between Tunstall and Withernsea. They have also contacted British Marine Life Rescue, who are attending to assist.”

A spokeswoman for the Maritime and Coastguard Agency said: “Just before 8.30am today HM Coastguard received a 999 call from a member of the public with a report of seeing a number of whales on the shoreline at Withernsea beach.

“Coastguard rescue teams from Withernsea, Hornsea and Easington have been sent.

“The relevant authorities have been informed including the Maritime and Coastguard Agency’s Receiver of Wreck, the local authority and the British Divers Marine Life Rescue who are also on the scene to assess the situation.

“The number of whales involved is yet to be confirmed but initial reports suggest it may be up to seven.

“Members of the public are asked to stay away from the scene to allow the authorities to work safely.”