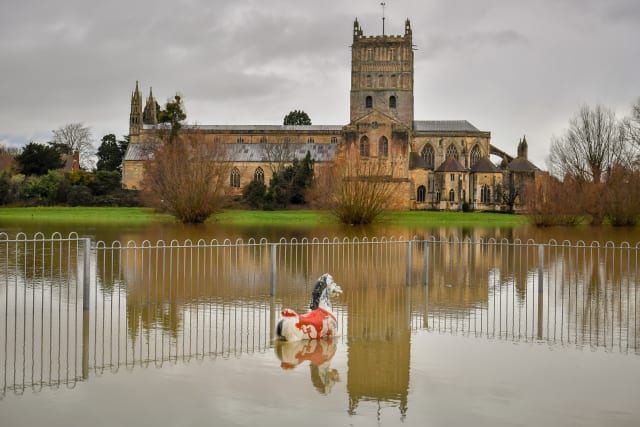 Storm Bella is due to lash parts of the UK on Boxing Day after dozens were rescued and homes and businesses flooded by heavy rain in the run-up to Christmas.

The Met Office said conditions across the UK will turn increasingly unsettled through to December 27, with strengthening winds and heavy rain moving in from the north.

An Amber national severe weather warning has been issued for parts of south Wales and across southern England, with gusts expected to reach up to 60-70mph in exposed coastal locations.

A yellow warning for wind for the whole of England and Wales as well as the far south of Scotland has also been issued and will be in force from 3pm on Boxing Day.

It came as homes and businesses were flooded and dozens of people were rescued from vehicles after heavy rain fell on Wednesday.

A weather warning for rain stretched from East Anglia, across Leicester, parts of Birmingham and north London, and through to mid-Wales and Cornwall, and remained in place until 2am on Thursday.

Across the country, more than 108 flood warnings and 159 flood alerts were still in force at 10am on Thursday as huge amounts of water worked its way through river catchments.

There were 16 warnings for the Severn and on the Welsh border, and 14 across Northamptonshire.

Herefordshire and Worcestershire Fire and Rescue Service said it was "deluged" with calls from 3pm on Wednesday, and rescued 44 people from stranded vehicles.

The brigade said it also helped homeowners after "serious flooding" across the two county area.

Drivers were stuck for several hours on a stretch of the M50 motorway near Ledbury, Herefordshire, posting images taken from their car seats showing running water flooding the carriageway.

Properties in various parts of the country, including East Anglia and Gloucester, were also flooded as there was up to 2 inches of rainfall in some areas.

Patrick Lloyd, 27, from Peterborough, Cambridgeshire, told the PA news agency he woke up to find much of his home had been submerged in water, causing thousands of pounds worth of damage.

He added that he had to help rescue an elderly neighbour who had become trapped without power.

Mr Lloyd said the 86-year-old woman had eventually been taken to hospital after spending around 50 minutes in the "freezing" floodwater.

"Luckily a bloke driving by saw her and got out and helped us with her. We had to get the fire service out to get her on to a board and we lifted her out for an ambulance," he said.

"We were worried about hypothermia, she spent a night in hospital, no idea if she made it or not."

Northamptonshire Fire and Rescue Service responded to 250 incidents, deploying crews to pump out properties and stranded vehicles, including one person stuck on the roof of a car at Fotheringhay between Peterborough and Corby.

Colleagues in Bedfordshire said they had 60 999 calls in 90 minutes, including three to people needing to be rescued from cars.

In Cambridgeshire, the A14 between Thrapston and Brampton was still shut both ways on Thursday morning, with police urging drivers not to chance driving through floodwaters.

Gloucestershire fire brigade said it had received "hundreds" of phonecalls, with the A40 west of Gloucester to Over, closed due to floodwaters, as police bemoaned motorists "ignoring" road closure signs.

The disruption meant a nearby pub, already closed for several months because of Covid-19 lockdowns, has had to shut again due to flooding.

The Toby Carvery at Over reopened in July after the first national lockdown, but then closed again during the second lockdown in November.

The pub, also known as The Dog at Over, would have only been able to serve takeaways from Boxing Day as Gloucestershire was moving into Tier 3.

Pictures posted on social media showed the pub flooded by the River Severn for the second time since previous floods in February.

Also flooded was Over Farm shop, near to the pub on the A40, linking the Forest of Dean to Gloucester.

Rees Keene, a partner in the business, said the area was still flooded but the water was receding.

In a video message, Mr Keene is stood in the flooded shop saying even his wellies are full of water.

"I'm at the back of the shop and I've never seen anything like this," he said.

He said staff had been helping police trying to turn cars around in the car park and described the scenes as "carnage".

"We had to close the road ourselves and every time a car drives through it is like a foot waterfall. Happy 2020," Mr Keene added.

Meanwhile, the BBC reported the South Wales Fire and Rescue Service had received 500 calls for help as the downpours hit many parts of the country.

Natural Resources Wales said 14 flood warnings had been removed in the past 24 hours, but by Thursday morning five flood warnings were still in place.

Nottinghamshire Police said emergency services had been called to a report of a landslide near some homes by a former quarry at 11.40pm on Wednesday, leading to a "small number" being evacuated.

Flood barriers had been put up as a precaution in Ironbridge, Shropshire, as well as Bewdley, Worcestershire, although levels there were not expected to reach those seen in February when the town's defences were partially breached.

According to a Natural Resources Wales gauge, 60.4mm of rain fell within 13 hours at the Trevethin reservoir in southern Wales on Wednesday.

In Ross-on-Wye, Herefordshire, 50.6mm – more than 2 inches – of rain fell, with 44.6mm of rain also detected in Corby, Northamptonshire, in the same period according to Environment Agency figures.

Meanwhile, in the North East, on Christmas Eve, snow was falling in Newton Aycliffe, County Durham, and Gateshead Tyne & Wear, as well as north of the border in Aberdeenshire, Scotland.

Alex Burkill, a meteorologist for the Met Office told the PA news agency: "There's been a lot of wet weather around, we've had a heavy rain across much of England and Wales, particularly southern parts of Wales but also further east.

"Most places in England and Wales have been really wet and we've seen strengthening winds too, there have been some gales in exposed parts, so quite unpleasant really."

Mr Burkill later said the rainfall would cease overnight into Christmas Eve with "lots of fine weather around, with lots of sunshine and a cold northerly flow."