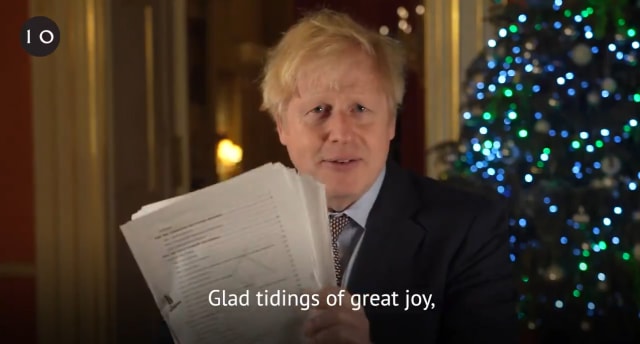 Boris Johnson has used a festive message to the nation to urge people to read the new Brexit trade deal after Christmas lunch on Friday.

The Prime Minister posted a video on Twitter in which he brandished the document, which has not been released in full yet, and at one point punched the air with enthusiasm at its contents.

The deal was agreed on Christmas Eve following months of negotiations with the European Union and comes just a week before the current trading arrangements expire with the UK leaving the single market and customs union without the prospect of tariffs and quotas.

Mr Johnson said: “Tonight, on Christmas Eve, I have a small present for anyone who may be looking for something to read in that sleepy post-Christmas lunch moment, and here it is, tidings, glad tidings of great joy because this is a deal.

“A deal to give certainty to business, travellers, and all investors in our country from January 1. A deal with our friends and partners in the EU.

“And I believe it will be the basis of a happy and successful and stable partnership with our friends in the EU for years to come.

“So, that’s it, that’s the good news from Brussels, now for the sprouts, and a happy Christmas to you all.”