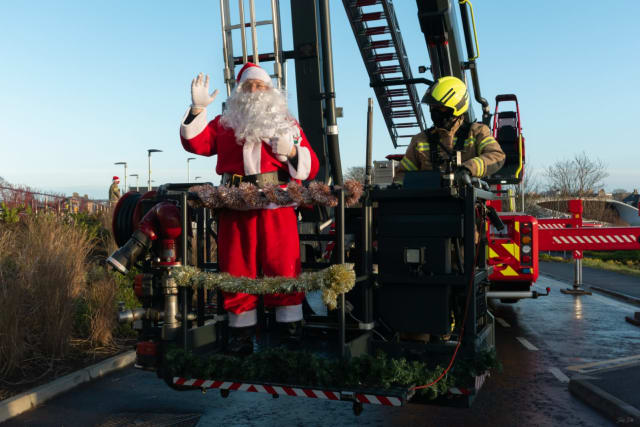 Firefighters have used a high reach appliance to lift Santa up to the windows to wave to children in hospital after the pandemic scuppered a traditional visit.

Father Christmas was not able to visit patients at the Royal Aberdeen Children’s Hospital due to Covid restrictions but the Scottish Fire and Rescue Service (SFRS) ensured he could still spread festive cheer.

Santa stepped into an aerial rescue pump festooned with tinsel and was raised high up into the air to wave through the window to children and staff.

The Morrisons of Inverurie charity team provided gifts for the youngsters as well as individual personalised Santa video messages, while the SFRS also donated presents.

The fire service tweeted pictures of the visit, writing: “Santa’s on his way! And even the big man in red calls us when he needs help.

“We gave him a lift to do a window visit to the children at the @NHSG_RACH while his reindeers rest and get ready for tonight.”

Down on the ground, firefighters dressed as two Highland cows and Hamish the Hound and the Morrisons charity team, who were wearing elf costumes, provided entertainment for those watching during the visit on December 19.

An SFRS spokesman said: “This collective community effort captured the spirit of Christmas and took it to the children at the hospital.

“And great teamwork by all… Santa will always find a way… with a little help from his friends.”

Appliances from Central Community Fire Station and the Red Watch also took part in the visit.