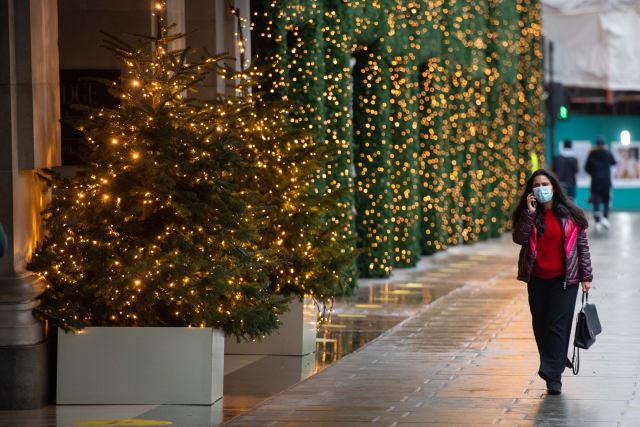 Around half of all new coronavirus cases in England could be the new variant discovered in the UK, according to analysis by the Office for National Statistics (ONS).

Concerns over the mutant strain, which scientists concluded was spreading more rapidly, mean millions of people in England will join those already under lockdown conditions from Boxing Day.

An estimated 645,800 people in private households in England had Covid-19 between December 12 and 18, according to the ONS – the equivalent of around 1.18% of the population, or one in 85 people.

In London, 68% of positive cases from December 14 to 18 were estimated to be genetically compatible with the new variant, while in eastern and south-east England the estimate is 65%.

For England as a whole, the statistics agency estimates that 49% of new cases could be the mutant strain that resulted in the creation of the new Tier 4 restrictions.

On Thursday, China’s foreign ministry said it would suspend flights to and from the UK, joining a list of nations who have imposed travel bans in light of the discovery of the variant.

Elsewhere, New York City mayor Bill de Blasio announced that authorities would personally visit all travellers from the UK to ensure they are isolating.

It comes after the UK implemented a travel ban on South Africa amid concerns over another new strain of Covid-19, which is feared to be more transmissible than that discovered in the UK.

Following disruption which has left thousands of lorry drivers stranded in Kent, Transport Secretary Grant Shapps said on Christmas Eve that ferries from Dover to Calais would run on Christmas Day and Boxing Day.

French firefighters and British military are working with NHS Test and Trace to test thousands of waiting hauliers, who must return a negative test within the past 72 hours to make the crossing.

A spokesperson for the Port of Dover said fewer than 100 vehicles left on Wednesday night due to restrictions on testing.

“However, now testing has fully mobilised at the port we anticipate that figure rising significantly throughout the day,” the spokesperson added.

Meanwhile, the latest NHS Test and Trace figures show that 34.1% of people tested at an “in-person” site in the week ending December 16 received their result within 24 hours.

This is down from 59.8% in the previous week, and is the lowest percentage since the week to October 28.

New data from NHS England shows that more than 70% of people in England who have been given a vaccine for coronavirus were aged over 80.

Prime Minister Boris Johnson had already announced that more than 500,000 people had been given the first of two jabs, but figures show 521,594 were vaccinated between December 8 and December 20.

These are the first figures published detailing the exact number of people to receive the Pfizer Covid-19 jab since Margaret Keenan became the first on December 8.

Priority groups in this initial phase – people aged 80 and over as well as care home residents and staff – were determined by the Government following advice from the Joint Committee on Vaccination and Immunisation.