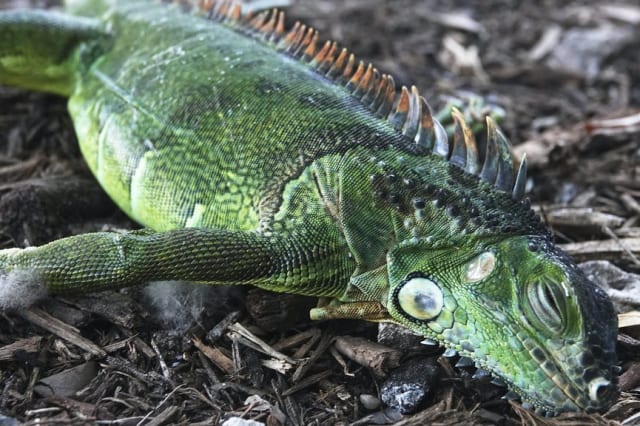 The US state of Florida is braced for a cold Christmas with falling iguanas one of the hazards predicted by forecasters.

The National Weather Service earlier this week warned that South Florida could experience the coldest Christmas Day in 21 years.

Morning lows on Saturday could drop into the low 30s and 40s Fahrenheit, the weather service said.

Because they are cold-blooded reptiles, iguanas living in South Florida trees often become immobile in chilly weather, causing them to drop to the ground when the thermometer plummets, though they are still alive.

In Jacksonville, the temperature was expected to drop 50F, from about 80F on Thursday to around 30F on Friday, putting it on the path to being one of the five coldest Christmas Days on record, according to the National Weather Service in Jacksonville.

A squall line with severe storms and fast-moving winds also was headed for north Florida on Christmas Eve.

Around the state, overnight shelters were opened to take in people who would otherwise be exposed to the cold, including several churches that were planning to hold Christmas services.

Many of the shelters promised social distancing and protective equipment to prevent the spread of the novel coronavirus.

The pandemic also was impacting a Space Coast tradition — Surfing Santa Day, which takes place the day before Christmas.

Normally drawing hundreds of surfers in Santa costumes to the Cocoa Beach surf and thousands of their cheering supporters on the beach, this year's event was moved online.

Participants were encouraged to individually go surfing or paddle-boarding at their favourite spot and post photos or videos to social media.

But Santa was getting help from one Florida state official.

With tongue firmly planted in cheek, Florida Agriculture Commissioner Nikki Fried this week issued "a certificate of animal movement", permitting Santa Claus and his wife, as well as their reindeer, "to enter and exit all homes, domiciles, encampments, and premises in the state of Florida between the hours of 8:00 PM on December 24 and 7:00 AM December 25, through or over any US border port".

"Given the challenges of this year, we want to ensure Santa Claus can safely travel the state and spread Christmas joy to all of Florida's children," Ms Fried said in a news release.