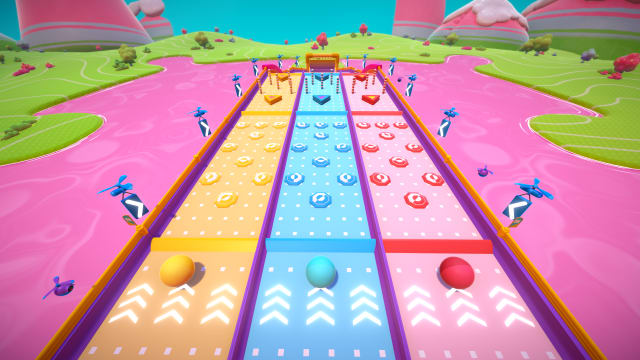 Team yellow’s bad luck in Fall Guys: Ultimate Knockout may have started because of some faulty development code, the game’s lead designer has revealed.

The British-made battle royale title rose to fame in 2020 for its Takeshi’s Castle and Total Wipeout-inspired take on the genre, allowing people take on a series of challenges and bid to become the overall victor.

Joe Walsh, one of the creators of the game at London-based developer firm Mediatonic, spoke to the PA news agency about the so-called curse of team yellow in rounds where players must work together in randomised groups to progress.

“That’s been an interesting one because looking back on it, I think there were probably, potentially, some bugs in the code that were probably making life harder for team yellow than we initially realised at the time, which should have now been fixed,” he told PA.

“I think it probably did come from somewhere genuine that people were struggling on yellow team, but that again is just a great example of really having no idea how players are going to respond to your game, we would never have thought that would become a thing that people fixate on, to the point where people are threatening to quit the game if they get put on yellow team.”

Walsh also revealed there are no plans to make the game free-to-play but he hopes it will launch on other platforms beyond PlayStation and PC in the future.

“Currently we don’t have any plans to make it free-to-play, we feel like the price point is cheap enough that if you want to jump in and play that you can,” he told PA.

“The PlayStation Plus was a huge part of why the game was as successful as it was, it really just propelled it into everybody’s minds, whether or not you play on PlayStation or not, you couldn’t really avoid hearing about it and I think that deal we had with PlayStation’s a huge part of the success of the game.

“We want Fall Guys to be played by as many people as possible and it’ll be crazy to not look at other platforms as part of that goal – we don’t have any official plans right now, but it’s something I would love personally for us to explore more.”