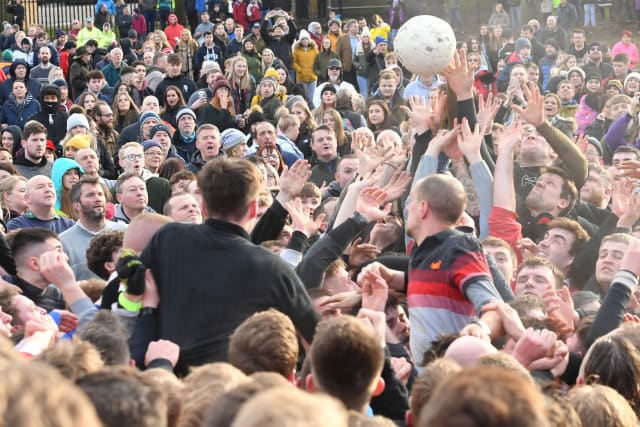 Next year’s Royal Shrovetide football match in Ashbourne, Derbyshire, has been cancelled due to Covid-19, organisers have said.

The traditional rough-and-tumble game, which sees the market town transformed into a field of play, attracts hundreds of players every year.

The two-day fixture held in the Derbyshire Dales was due to take place over February 16/17 next year.

But in a statement announcing its cancellation, the organising committee said the safety of all must be the priority, adding that they would instead “look forward to Shrovetide 2022”.

The match sees two teams battling to get the ball to goals three miles apart in a relatively lawless rugby/football hybrid that dates back centuries.

There are records of a similar game being played around Shrovetide across the UK as far back as the 12th century, but the Ashbourne game is suspected to have been played since 1667.

Teams are picked based upon where they are from in the town, although there are no limits to the teams’ sizes and visitors to the area make up the numbers too.

You are an Up’ard if you are from north of Henmore Brook, or one of the Down’ards if you were born south of it.

The goals, which players must hit three times to score, used to be mills either side of the town that have since been demolished.

In a statement, organisers said: “The Shrovetide Committee have been continually assessing all factors relating to the organisation of the Shrovetide football game due to take place on the 16th and 17th of February 2021.

“It is with great regret that the committee have decided that the game in 2021 will be cancelled.

“The increasing impact of Covid-19 will continue to affect all of our lives for many more months and the safety of the players, spectators and supporters of our game must be our priority.

“We must all protect the tradition and reputation of our beloved game to ensure it continues for many more years.”

The committee added: “We hope everyone will stay safe and look forward to Shrovetide in 2022.”

The fixture gained its royal title in 1928 after Edward VIII, who was then Prince of Wales, opened the game.

In 2003, the current Prince of Wales was given the honour of “turning up” the ball to commence the match – joining other famous names, including the late legendary football manager Brian Clough.