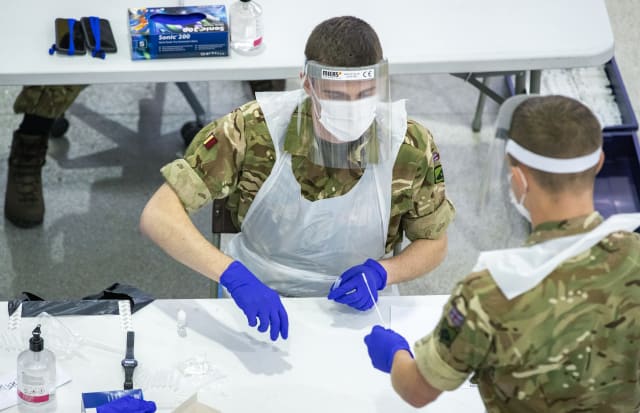 A quarter of Liverpool’s 498,000 residents were tested using lateral flow device tests (LFTs) between November 6 and December 9, with 897 positive results.

And a third used the LFTs or PCR tests, with 2,902 positive results, according to the evaluation, led by the University of Liverpool.

The researchers found that the Innova LFT device identified two fifths of the PCR positive cases when analysing a sample of 6,000 users who self-swabbed under supervision.

And it potentially identified two thirds of positive cases in people with higher viral loads, who are more likely to be infectious.

They concluded that it is a helpful tool for identifying asymptomatic cases.

But, given its low sensitivity, they say “caution should be exercised” in how the tests are used, particularly in vulnerable settings “where the consequences of infection are severe”.

In these settings, LFTs should be used with, but not to replace, PCR tests, they say.

There is no clear evidence that the introduction of mass testing had an impact on coronavirus cases or hospital admissions, they add.

Young people, particularly males, were the hardest to reach, and people in areas of low internet use were less likely to take up a test and more likely to test positive.

Awareness of the pilot was high and attitudes generally positive, the authors said.

However, fear of not having adequate support to isolate, and misinformation over test accuracy were found to be “significant barriers” to participation.

Professor Iain Buchan, who led the evaluation, said: “The sensitivity of the lateral flow device was less than expected at 40%, but the time and scale gained by having a low-cost test that returns results within an hour without a laboratory is a valuable new tool for tackling Covid-19.

“Younger people, particularly men, from deprived areas were harder to reach, as expected. But digital exclusion was a bigger barrier than we expected.”

Liverpool’s director of Public Health, Matthew Ashton, said the pilot had been “hugely valuable”, adding: “A significant proportion of the population embraced the idea wholeheartedly, helping identify a substantial number of asymptomatic people who otherwise would have been unknowingly spreading it to others.”

A third of all cases detected in Liverpool between December 11 to 17 were via LFTs after the military handed over the reigns to local agencies on December 3.

Health Secretary Matt Hancock said on Wednesday that 116 local areas have signed up for community testing, with conversations ongoing with more, calling the rapid tests “extremely effective” at finding cases.

He said the Liverpool assessment “shows how effective this can be”, adding: “I’d urge anyone who has the opportunity to take part to protect their local area.”

Paul Hunter, Professor in Medicine at the Norwich School of Medicine, University of East Anglia, said it did not seem as though the pilot had “much if any impact”.

He continued: “Indeed with the low overall take up rate, the even lower up take in populations with the higher infection rates and the poorer than expected sensitivity of the lateral flow test in use, I doubt that such as scheme as that piloted in Liverpool will have more than a marginal impact on the spread of the Covid-19 in the UK.

“Whether such population-wide testing of asymptomatic individuals could be improved to the point that it would have a valuable impact on the epidemic especially with the more infectious new-variant must be uncertain.”