Mother celebrates Christmas with triplets after 12th attempt at IVF 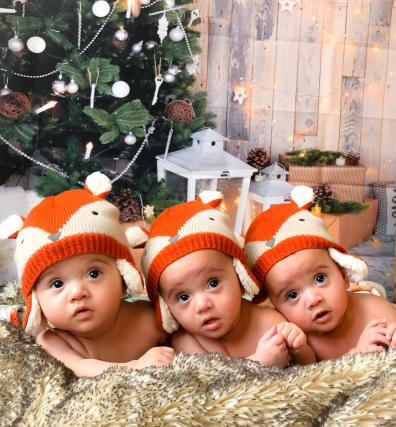 A woman who gave birth to triplets at 32 weeks after her 12th attempt at IVF and several miscarriages is looking forward to celebrating Christmas with her family.

Summer Preston, 42, gave birth to Otis, Rocco and Prince on May 18 in the middle of the Covid-19 lockdown.

While pregnant, Ms Preston, an estate agent, suffered from the life-threatening condition with Twin to Twin Transfusion Syndrome (TTTS).

One baby was not getting enough blood and nutrients from the placenta and the others were getting too much. Left untreated, this meant they could suffer a stroke or die.

Ms Preston and her partner Davidson Shillingford, 52, opted to have laser surgery on the placenta to correct the imbalance of the blood flow.

At 32 weeks, Ms Preston was rushed to hospital as she started to bleed heavily with a uterine scar rupture and gave birth to Otis, Rocco and Prince, weighing 4lb 3oz, 2lb 10oz and 3lb 8oz respectively.

They then spent a month in hospital when Covid-19 cases were high and were not allowed any visitors.

Older sister, Violet, aged seven, did not get to meet her brothers until they came home.

Ms Preston, who lives in Crouch End, London, said that without the help of the Multiple Milestones charity and managing director Christina Axton, preparing for Christmas would have been very difficult.

“It is quite relentless but enjoyable and it’s quite non-stop,” she said.

“They feed every three hours and that could take an hour, take a little break in between, before we start again, so it’s quite full on.

“You hope they all go to sleep at the same time. If you mess up the routine you can pretty much be a headless chicken for the rest of the day.

“To have them safe and at home for Christmas is lovely. This time last year I was pregnant and just preparing to tell my daughter she was going to be a big sister to identical triplets.”

Ms Preston said discovering she was pregnant with triplets was a “huge surprise” after problems conceiving Violet.

“It took eight embryo transfers and three loses to conceive Violet, so she’s quite a miracle,” she said.

“We had some embryos frozen and we always said we would use all our embryos. On the last round we got three.”

Ms Preston praised the charity, which helps families with multiple births, for all their support, especially in the run-up to Christmas.

“Just recently I’ve fallen behind and when you’re working flat out every single day dealing with the triplets and keeping up with the housework, to have anything extra like Christmas shopping really puts you out of sync.

“Christina came over and looked after the babies and helped me get ahead.”

Violet has also had two periods off school because of Covid and as well as caring for the triplets, Ms Preston has been home schooling.

“You want them to go to school or nursery because it’s so helpful and it’s good for them obviously mentally but then chances are, they’re going to be told to self-isolate which means whole families have to stay in,” she said.

Due to fears of spreading coronavirus, Ms Preston has been reluctant to be helped by family members

“Christina works in a hospital and gets tested twice a week, so you feel quite reassured that you can let somebody in, and the risk is much lower.”

Christina Axton, who is a paediatric nurse, said: “We have provided families with remote and hands on support during the course of 2020.

“Summer faced a really serious condition that threatened the life of all three triplets.

“The restrictions on visiting family and socialising has massively impacted a lot of the parents we support, and many have found the help provided by our team invaluable.

“This year as a charity we have seen our referrals and enquiries quadruple.”