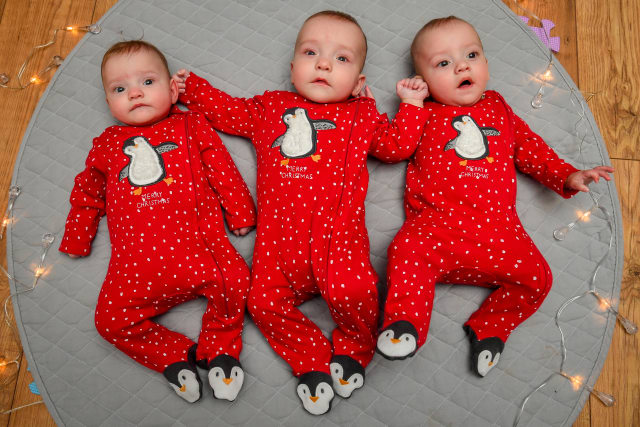 Miracle triplets born prematurely during the Covid-19 pandemic are about to celebrate their first Christmas.

Willoughby, Rafferty and Emmeline were born at 29 weeks, on May 28, weighing between 2lb and 3.5lb.

They were whisked into intensive care as soon as they were born and were kept in hospital in both Gloucester and Bristol for eight weeks.

Their mothers, Shelley Davis, 35, and partner Sarah Bell, 33, were unable to see their children for more than two hours after their births.

Before they were born, Ms Davis, whose waters broke at 27 weeks, spent three weeks in hospital in isolation due to Covid-19 and was told she might lose one of the babies if she went home.

Emmeline was born weighing 2.04lb, Willoughby was 2.10lb and Rafferty was the heaviest at 3.5lb. They all needed quite a lot of help with breathing and spent time on ventilators.

After getting home to Cirencester in Gloucestershire, Ms Davis and Ms Bell received limited support because of the pandemic and really struggled in the first weeks.

A friend put Ms Davis, a teacher, and office manager Ms Bell in touch with the charity Multiple Milestones, which helps families of multiple births.

With the help of the charity’s managing director, Christina Axton, the couple established routines for caring for the babies who, at six months old, are now sleeping through the night.

Now they are preparing to spend their first Christmas together as a family of five.

“We were really lucky as the charity helped us with setting up routines and things like that for them really,” Ms Davis said.

“I think if we didn’t have the routine, we’d be really stuck, but knowing exactly what we’re doing every part of the day really helps.”

Ms Davis said she and her partner found out shortly before Christmas last year that they were expecting triplets.

“We’re thrilled to be spending our first Christmas with them,” she said.

“We are so fortunate that, even though how early they were, they are really healthy.

“We are so fortunate to be spending this first Christmas together and we want it to be as magical as possible for them, to be honest.

“Our children really love twinkly lights so, when we are getting them ready for bath time, we always put a disco light on and they watch it and that really calms them before bath time.

“The Christmas tree has been their favourite thing to watch, it has mesmerised them.”

Ms Davis also praised the NHS and the care she received at Gloucestershire Royal Hospital and St Michael’s Hospital in Bristol.

“We are so grateful to the NHS for everything that they did for us as well, even in a pandemic, their care for our children, and for me and Sarah especially as well,” she said.

“They couldn’t have done more to be supportive of our whole family. We are so grateful for everything that we have this year.”