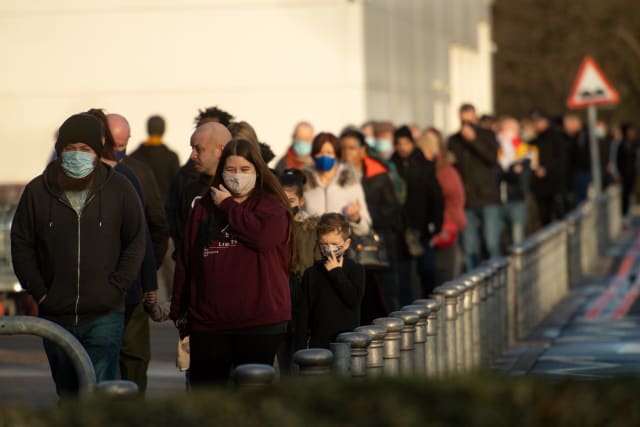 Here is a summary of the changes to the Covid-19 tier levels announced on Wednesday by the Government.

This is 43% of the population of England.

Some six million people were added to Tier 4 in Wednesday’s briefing in the following areas:

The main restrictions in Tier 4 are:

– No household mixing allowed, though one person can meet one other person outside in a public space
– All non-essential shops and businesses must close, including personal care and indoor entertainment
– Nobody can enter or leave Tier 4 areas
– Residents must not stay overnight away from home

Some four million people will be moved to Tier 3 from December 26, bringing the total in Tier 3 to 25 million people, or 44% of the population of England.

The areas moving into Tier 3 are:

The main restrictions in Tier 3 are:

– No household mixing allowed indoors or outdoors, except in parks and public gardens
– All hospitality is closed, except for takeaways and deliveries
– All accommodation and entertainment venues are closed

The number of people living in Tier 2 will fall to seven million, or 13% of the population of England.

Two areas have been moved from Tier 1 to Tier 2: Cornwall and Herefordshire.

They join Cumbria, Devon, the Liverpool City Region, North Yorkshire, Rutland, Shropshire, Wiltshire (not including Swindon), Worcestershire and York, which remain in Tier 2.

The main restrictions in Tier 2 are:

– No household mixing allowed indoors, but the “rule of six” applies outdoors
– Hospitality venues must close unless serving substantial meals with drinks
– Large sport and entertainment events are allowed but with a very limited audience

The main restrictions in Tier 1 are:

– The “rule of six” must apply indoors and outdoors
– There must be table service in hospitality venues, with last orders at 10pm and closing time at 11pm
– Large sporting and entertainment events are allowed but with a limited audience.