Barnier to brief EU ambassadors on the state of Brexit talks 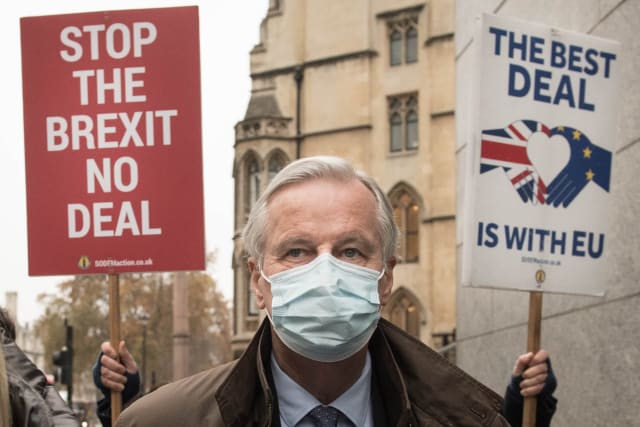 Michel Barnier is to update ambassadors from the 27 European Union nations on the state of the negotiations with the UK as time runs out for a deal.

The EU’s chief negotiator will also set out the state of play to MEPs as efforts continue to reach an agreement with the UK before the current trading arrangements expire on December 31.

Prime Minister Boris Johnson has continued to insist the UK will “prosper mightily” without a deal, despite warning that it could add further damage to an economy already ravaged by coronavirus.

The UK leaves the single market and customs union on December 31 and will face tariffs and quotas on trade with the EU unless a deal is reached.

But talks in Brussels remain difficult, with “significant differences in key areas”, including fishing rights and rules on maintaining fair competition.

Downing Street insiders have flatly rejected reports that there has been a breakthrough over fishing quotas.

Reports suggested the UK would be prepared to accept an EU offer to cut the amount of fish it catches in British waters by around a third over a five-year period.

But one Number 10 insider described the reports as “bollocks” and officials have warned that significant differences remain between the two sides.

At a press conference on Monday, Mr Johnson said the position is “unchanged” and insisted the UK will thrive without a deal, relying on World Trade Organisation terms.

“There are problems. It’s vital that everyone understands that the UK has got to be able to control its own laws completely,” he said.

“And, also, that we have got to be able to control our own fisheries.

“And it remains the case that WTO terms would be more than satisfactory for the UK.

“And we can certainly cope with any difficulties that are thrown in our way.

“Not that we don’t want a deal, but WTO terms would be entirely satisfactory.

“Prosper mightily remains an extremely good description of life after January 1 either way.”

The Office for Budget Responsibility has forecast that a no-deal outcome could result in a 2% hit to gross domestic product – a measure of the size of the economy – in 2021.

That would equate to around £45 billion being wiped off the value of the UK economy.