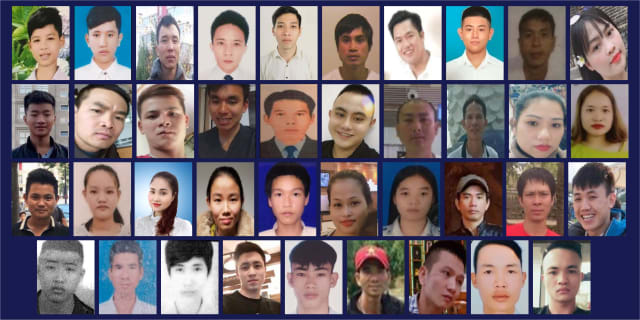 Hands entwined, a couple comforted each other as their dream of a life in Britain slipped away in the back of a dark, hot trailer.

Tran Hai Loc and Nguyen Thi Van, both 35, were still huddled together when they were discovered among the 39 dead on October 23 last year.

Their bodies were carefully removed from the trailer, still holding hands, and taken to hospital together.

The couple had travelled by plane to work in Hungary as fruit pickers for one-and-a-half months, having organised the placement through a labour company in Hanoi at a cost of 7,000 US dollars (£6,000) each.

Their families last heard from them on October 18 last year when they phoned to say their plans had changed.

Four days later, they and the other men, women and children had made their way to a pick-up point en route to Zeebrugge in Belgium, with one group coming from Paris and another from Brussels.

Jurors at the Old Bailey heard that there could have been a 40th migrant on the trip, but for the fact that he was late for his rendezvous with Eamonn Harrison’s lorry in Bierne, northern France.

During the cross-Channel trip on board the Clementine, the group had desperately tried to raise the alarm, even calling the Vietnamese emergency number, as they ran out of air.

When they found there was no mobile phone signal in the trailer, some recorded goodbye messages to their families.

The parents of 15-year-old Nguyen Huy Hung, one of the youngest victims, said their son was a “big football fan” and a “very peaceful and smart boy”.

In a tribute issued through police, they said: “He loved football very much and he loved UK teams as well as the Champion’s League. He was also a good player.

“He always dreamt of going to the UK and he tried very hard to study at school as well as learning English for that purpose.”

The sister of 22-year-old Dang Huu Tuyen described him as a “gentle, lovely and dedicated Catholic who never did anything to hurt other people”.

She said: “As a family our hearts are broken.”

The young son of 41-year-old Phan Thi Thanh wrote a poem titled Beloved Mommy! which included the lines: Always by my side/Always guiding me the way.

A metal pole had been used to try to punch through the roof of the refrigerated container, but only managed to dent the interior.

Prosecutor Bill Emlyn Jones had said: “There was no way out, and no-one to hear them, no-one to help them.”

When police were alerted to the deaths by Maurice Robinson, they found the migrants, aged 15 to 44, were half-naked and frothing at the mouth.

They had been dead long enough for rigor mortis to have set in.

Former Detective Chief Inspector Martin Pasmore, who dealt with their identification, said: “It was shocking to say the least.”

He said it was important to treat the bodies with “dignity and respect”.

“Dying in such a horrendous way… You could not help but have a great sense there was no panic there.

“They seem to have died with dignity and respect for each other, just the way the bodies were laid.

Mr Pasmore said that seeing the tragedy had affected officers, and the risk of post-traumatic stress disorder was uppermost in his mind.

It also had a “significant impact” on the families in Vietnam, many of whom had borrowed thousands of pounds to fund the journey.

During the trial, jurors were provided with a snapshot of the victims and their dreams of a better life.

They included a bricklayer, a restaurant worker, a nail bar technician, a budding beautician, and a university graduate, who had worked in IT to save up and fund his own passage.

Their journeys across the world, via travel agencies in Vietnam, had included various stops in Russia, China, Germany, Poland, Hungary and Romania.

They would fly to one country, work there so they could build up cash reserves and send some money home, before then attempting the perilous journey to Britain.

Many of their families borrowed thousands of pounds to fund their passage, relying on their potential future earnings once they got in Britain.

Some of the migrants had made repeated failed attempts to be smuggled into the country, with one being turned back five times.

Witness X, a Vietnamese migrant who was smuggled by the gang on October 11 last year, provided an insight into why so many people were prepared to risk everything.

He was attracted to Britain partly because of the language.

Firstly, he had moved from Poland to France after getting a Schengen visa as a business student.

He then arranged his “VIP” trip across the Channel through a Vietnamese connection on Facebook, who put him in contact with someone in Dulwich, south-east London, called Phong.

He got a taxi to a pick up point where he was ushered onto a trailer by the driver, who told them to go “quickly” but “keep quiet”.

Before arriving at Zeebrugge, the driver – said to be Eamonn Harrison – stopped once to provide them with water and further instructions, the court heard.

The migrants were provided bags to urinate in and told to huddle together in the centre of the trailer when they heard a signal.

After he arrived in Britain safely, witness X was made to stay at Phong’s flat in Dulwich until his parents in Vietnam had transferred the £13,000 payment.

Asked what his plan was, the migrant told jurors: “I’m going to go to the Home Office to apply for my papers.”

Detective Chief Inspector Daniel Stoten, of Essex Police, said: “So you see this unacceptable disgusting trade was quite financially rewarding for these crime gangs.”

He said the “scale and complexity” of the threat posed by the gangs and the “callous nature of their business model” should never be under-estimated.