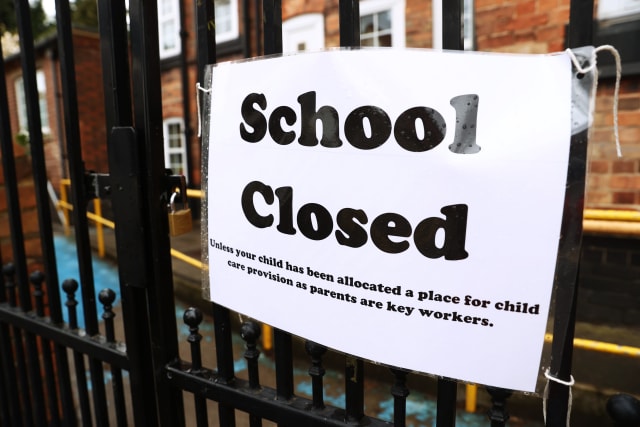 The Government should allow schools to move classes online for most pupils for a fortnight in January to allow Covid-19 cases to fall, Britain’s largest teachers’ union has said.

The leaders of the National Education Union (NEU) have written to Prime Minister Boris Johnson and Education Secretary Gavin Williamson to call for all students to be kept at home – except key workers’ children and vulnerable pupils – over the first two weeks of January to get mass testing set up.

The two-week period should be used to begin vaccinating school staff, as well as NHS and care workers, the union leaders say in their open letter.

It comes after the Government announced secondary school and college pupils’ return to class in England will be staggered in the first week of January to help schools roll out mass testing of students.

A coalition of education unions and organisations have warned that many secondary schools and colleges will not be able to get the testing system in place by January 4 following the announcement at the end of term.

In the letter, Mary Bousted and Kevin Courtney, joint general secretaries of the NEU, voice concerns about the increasing infection rate and reports that the new variant of Covid-19 has increased transmissibility.

It says: “Firstly, we believe that you should allow and encourage heads in ensuring that first two weeks of learning should be online, apart from key worker and vulnerable children, to allow cases to fall further and to allow time to properly set up the system of mass testing.”

The letter adds: “Secondly, we believe that you should ask the local Directors of Public Health to set the system of mass testing.

“We believe that the Government could support them via a national advertising campaign to find the staff and volunteers needed, as you did in finding the volunteers to help the NHS at an earlier stage.

“We would hope that such a system could then test all children, at their school site, prior to a return to in-person teaching from January 18.”

On Sunday, Health Secretary Matt Hancock refused to confirm that schools in Tier 4 areas would reopen in January if cases continue to rise.

Asked about possible school closures, Professor Neil Ferguson of Imperial College London, also a member of the Government’s New and Emerging Respiratory Virus Threats advisory group (NervTag), told BBC Radio 4’s Today programme: “So undoubtedly increased transmissibility limits our options for manoeuvre even more, and there is a hint from the data that this variant may infect children slightly more effectively than the previous variants, so it’s very difficult to prove causality.

“I think what we’ll see in the next two weeks though, whilst schools are closed, is probably all the variants of the virus in circulation at the moment declining, we’ll be tracking very carefully whether we can see differences in that rate of decline and really it’s the data which is being put together now and unfortunately over the Christmas break which is going to inform policy measures in January.

He added: “It’s just too early to tell. It is going to be difficult no doubt about that… but it’s too early to say precisely what additional measures might be needed.”