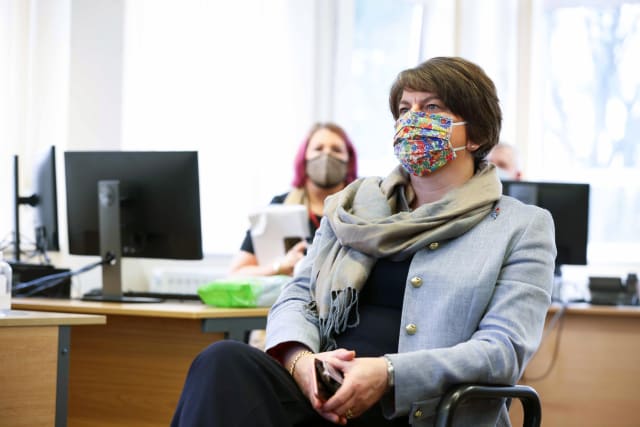 The new strain of coronavirus is probably already in Northern Ireland and the Republic, Stormont’s First Minister has warned.

Arlene Foster said ministers were very concerned about the highly infectious mutation and tests were ongoing.

She told the BBC’s Good Morning Ulster programme: “It is probable that it is here and likely it is in the Republic too.”

Flexibility will be afforded to people working on December 25 to enable them to join others on another day over the festive break.

The decision was made by ministers during an emergency virtual Executive meeting late on Sunday night.

The DUP leader urged people to follow the new rules.

She deeply regretted that official guidance on the holiday season had changed.

Ministers also debated imposing a temporary ban on travel from Great Britain to Northern Ireland in response to the new variant of Covid-19 that has taken hold in London and Kent.

No decision was taken but ministers are expected to return to the issue on Monday.

A swathe of European countries including the Republic of Ireland have imposed bans on travel from the UK and this has halted some freight movements.

Sinn Fein supported the move, however practical issues were raised around how quickly such a ban could be introduced, given the time it would likely take for the Department of Health to draw up regulations to bring it into effect.

The DUP position was that UK internal travel is already banned from Tier 4 areas in England, so there is no need for added Stormont legislation to enforce that.

The party believes the responsibility for stopping flights and ferries within the UK is an issue for the UK Government and has also raised concern that Stormont could leave itself open to compensation liabilities if it was to legislate on the issue.

The Health Department is to seek further legal advice.

Health Minister Robin Swann is to consult with Northern Ireland’s Attorney General about the legality of a ban on travel from Britain.

He is to give a statement in the Assembly at midday on Monday.