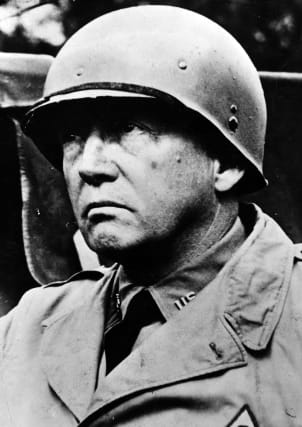 A veteran who was liberated from a prisoner of war camp by General George S Patton has paid tribute to the US commander on the 75th anniversary of his death.

Christopher Hutchinson, 98, a retired lieutenant colonel, was captured by German forces during an operation in Italy in 1944 and taken to Stalag VII-A near the town of Moosburg in south Germany.

Mr Hutchinson was serving in the Royal Tank Regiment when the tank he was travelling in was hit by a missile and caught fire, killing two men on board.

He was captured by German paratroopers then held at Stalag VII-A for eight months until the camp was liberated on April 29 1945, days before the war in Europe ended.

Mr Hutchinson, from Seahouses, Northumberland, described how the German guards were “very frightened” before the sound of gunfire in the distance.

“The noise increased and soon all the guards rushed to the main entrance to be met by three American Sherman tanks followed closely by a scout car containing General Patton,” said the veteran, who is a supporter of SSAFA – The Armed Forces Charity.

“The General leapt from his vehicle and brandishing his ivory-handled revolver, demanded to speak with the senior British prisoner of war.”

After a short consultation, General Patton departed in his car, leaving the Sherman tanks to guard the main entrance to the camp.

The senior British officer who had spoken to General Patton then assembled all the British prisoners of war, including Mr Hutchinson.

“It was wonderful, particularly when we realised it was General Patton himself who came to the camp to release us,” he said.

“We knew then that things would be worked out, and they were. He got things going. He would stand no trouble.”

The British prisoners of war were told to remain in the camp while General Patton arranged for a fleet of military transport aircraft to fly them to Supreme Headquarters Allied Expeditionary Force in France.

On May 8 – VE Day – Mr Hutchinson was flown back to the UK by a Lancaster bomber with fellow former prisoners of war.

He described being marched into a building and being stripped of his clothing and footwear before a de-lousing shower.

The soldiers were weighed, with then 23-year-old Mr Hutchinson weighing just seven stone, and given new clothing and boots.

Mr Hutchinson was later reunited with his sister Katharine, who informed him that his mother and sister Ruby were alive and well.

Speaking 75 years on, Mr Hutchinson said: “General Patton was a real inspiration to his troops.

“Whoever heard of a General leading from the front in modern warfare? I remember, post-war, seeing photos of him standing up in his jeep directing traffic when his army had been brought to a standstill by a traffic jam in the Ardennes area.”

He said only a leader of General Patton’s “dynamic calibre” could have arranged food for the camp and a fleet of aircraft to liberate many thousands of prisoners of war within days.

Mr Hutchinson, who has five children, 10 grandchildren and six great-grandchildren, transferred from the Royal Tank Regiment into the Royal Army Pay Corps after the war.

He spent the rest of his service working in finance until his retirement in 1987.

The veteran urged people to support the “vital” work of charities this year, including SSAFA, which he recommended to friends and colleagues throughout his military career.