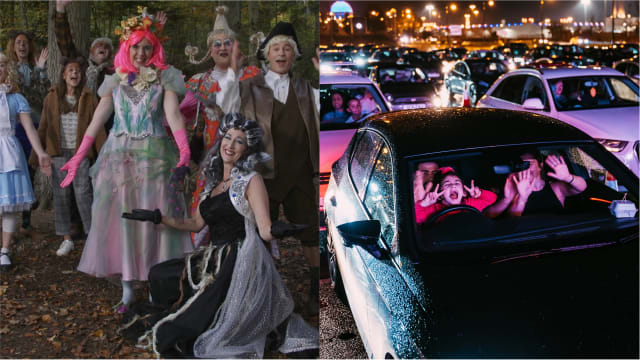 Pantomime performers have said they had to “adapt or quit” as the festive tradition moved online and into car parks to meet coronavirus restrictions this year.

Social distancing measures have meant many pantomime productions have moved audiences online via video call or into cars as part of a drive-in experience.

In Switzerland, the Basel English Panto Group’s Goldilocks And The 3 Bearz bills itself as the world’s first online pantomime – and has been enjoyed by audiences in the UK and across Europe.

Mixing pre-recorded scenes with video calls for audience participation, organisers said planning began for the production as early as April, when they feared the festive tradition may not be able to go ahead at all.

“Strangely, 35 years ago I used to teach epidemiology at Imperial College,” co-writer and director Richard Brown, who also plays Poppa Bear in the production, told the PA news agency.

“I got my old notes out and looked at what was happening with Covid and scared myself rigid – I also realised we would be unlikely to be able to get together to audition, rehearse and put the show on.”

Producing the show required the team to work with specialised video call technology platforms to allow for smooth audience participation.

It also faced setbacks including half of the cast needing to quarantine part way through filming due to a Covid outbreak – with Mr Brown having to quickly rewrite the scenes as Zoom calls.

Deanna Brittain, who plays chief antagonist and bad fairy Myrtle Mayhem, said: “The audience is the energy that is absorbed by your character, so that was quite a challenge, coming up with one in your head – they’re booing me, I need to react.

“I’m very proud of all the actors … in the end, I think we nailed it.”

Chloe Bernard, who plays Goldilocks in the unique production, added: “It’s been really, really different – it’s just about adapting. Either we quit or we adapt.”

Ms Bernard is also a choreographer for the show and said she had to adapt dances so that cast members could socially-distance.

Gary Starr Pantomimes has spent December performing Cinderella in front of a drive-in audience in locations across the UK – part of a collection of Covid-safe entertainment offered by Parking Lot Social, which also includes “car-aoke” and bingo.

“What we see on stage looking into the cars is the audience doing the ‘it’s behind yous’ – they’re flashing their lights, beeping their horns with their windscreen wipers going,” Ruth Brennan, in costume as the fairy godmother, said backstage.

“The first time we did it we were astounded by the sheer volume of the car horns … it’s a bit overwhelming but we’ve got used to it now.”

Over 500 vehicles often attend the shows, their views enhanced by large screens either side of the stage.

The adapted productions follow a difficult year for the performance industry.

Ms Brennan said Gary Starr Pantomimes is looking to help other performance companies with solutions to Covid restrictions “to keep them on their feet”.

“To the performing community the message is keep your chin up,” she added.

“There’s a lot less work than we’re used to having, but there’s still work out there.”

Darryl Hughes, dressed as another Ugly Sister, Mildred, added: “Panto and theatre in general, especially around this time is a form of escapism that we all need.

“Seeing all the people in their cars having a great time, clapping away … I’ve learned it’s such a wonderful thing we get to do.

“This is something that will find a way no matter what.”