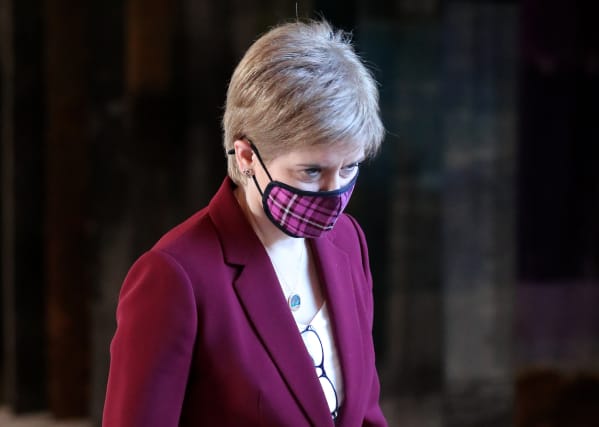 Ms Sturgeon has warned “preventative measures” could have to be imposed to stop the “faster-spreading strain taking hold”.

She is expected to announce whether the Scottish Government will make changes to the easing of restrictions over Christmas, after scientists confirmed a new variant coronavirus was spreading more rapidly.

“Cases currently at lower level in Scotland than UK – but preventative action may be necessary to stop faster spreading strain taking hold.”

The media briefing is scheduled to begin at 5.30pm, with the First Minister being accompanied by interim chief medical officer Dr Gregor Smith and national clinical director Jason Leitch.

Following Mr Johnson’s announcement for England, people south of the border in Tier 4 should not mix with anyone outside their own household, although support bubbles will remain in place.

In Tiers 1-3 in England the rules allowing a maximum of three households to mix will be restricted to Christmas Day only.

In the past 24 hours, 41 deaths from coronavirus and 572 positive tests have been recorded north of the border, though the test positivity rate fell from 4.2% to 4.0%.

Ms Sturgeon told the daily coronavirus briefing on December 15 that nine cases of the new Covid-19 variant had been identified in Scotland.

All of the cases of the new strain were found in the Greater Glasgow and Clyde health board area, the First Minister told MSPs.

Both Scotland’s Health Secretary Jeane Freeman and Deputy First Minister John Swinney have refused in recent days to rule out a post-Christmas lockdown.

Ms Freeman said on Friday that “every possible option remains on the table” while Mr Swinney said on Thursday that the Scottish Government will “take decisions that will be sustainable for a period into January and February to protect the public interest”.

Scotland has five tiers of coronavirus restrictions, with the majority of the country currently in Level 3 – the second highest.

A review of the levels is due to take place on Tuesday.