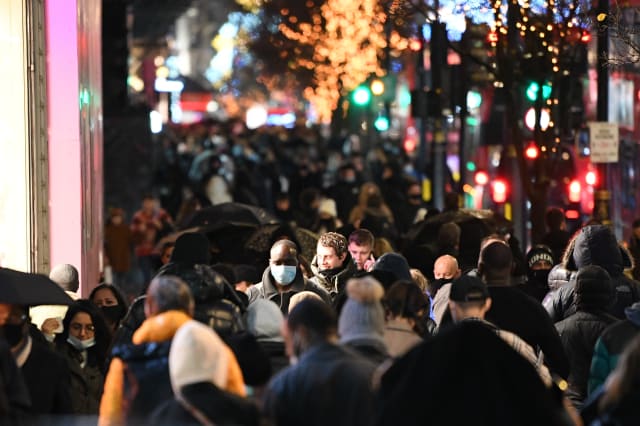 Retailers in England are now “staring into the abyss” after Boris Johnson announced tougher Tier 4 coronavirus restrictions across parts of the country the week before Christmas, industry leaders have said.

Business bosses have criticised the decision – which forces all non-essential shops to close – and suggested that “thousands” of jobs could be lost due to the measures.

British Chambers of Commerce director general Adam Marshall said: “Christmas was already cancelled for many businesses, but even more will now suffer as a result of this last-minute decision.

“While Government must act on public health concerns, it must also address the economic consequences of its actions.

“The introduction of an additional tier without warning or additional help is a huge blow to businesspeople who wanted nothing more than to be able to trade safely through the holiday season and beyond.”

Others estimated that up to £2 billion in sales may be lost per week by the new measures.

The British Retail Consortium (BRC) said that the Government’s “stop-start” approach to regulations was “deeply unhelpful”.

Helen Dickinson, chief executive of the BRC, said: “We recognise that the Government has difficult decisions to make and the situation with the pandemic is very fast moving, but this is hugely regrettable news.

“Retailers have invested hundreds of millions of pounds making stores Covid-secure for customers and staff.

“The consequences of this decision will be severe.

“For businesses, the government’s stop-start approach is deeply unhelpful – this decision comes only two weeks after the end of the last national lockdown and right in the middle of peak trading which so many are depending on to power their recovery.

“Faced with this news – and the prospect of losing £2 billion per week in sales for the third time this year – many businesses will be in serious difficulty and many thousands of jobs could be at risk.”

Councillor Rachael Robathan, leader of Westminster City Council, said: “On every level this is devastating… for those businesses now staring into the abyss after having had a last gasp at pre-Christmas sales snatched from them.

“The shockwaves of this are going to jolt through every part of Westminster.

“This is an absolute tragedy for everyone who had worked so hard to revitalise our West End and fan the embers of recovery for our City.”

Richard Burge, chief executive of the London Chamber of Commerce and Industry, said that “exceptional and immediate cash” should be provided.

“With our hospitality businesses already closed, the vast majority of the high street follows suit,” he said.

“International travel restrictions have huge implications for London’s airports and onward benefit into the capital’s and UK economy.

“The Chancellor must this evening announce exceptional and immediate cash and grant aid for all retail, leisure and hospitality business that will be shutting their doors tonight.”

Federation of Small Businesses vice-chair Martin McTague added that Tier 4 restrictions would be a “hammer blow” to non-essential retailers.

“From shops to hairdressers, this would normally the one of the busiest times of the year,” he said.

“Many will have bought extra stock and increased staff hours, now their takings are to disappear literally overnight.

“Gyms, and so many that rely on them more than ever for physical and mental health, will also be devastated.

“Whenever new restrictions have been imposed, the Government has conceded that emergency support must be provided.

Michael Kill, chief executive of the Night Time Industries Association, said retailers had “lost all confidence” in the Government strategy for tackling Covid-19.

He said: “The unrelenting closing and reopening of businesses is costing owners hundreds of thousands of pounds, and coupled with the erratic decision-making around restrictions, is rapidly destroying the ability of the sector to bounce back.

“This financial burden and commitment has been recognised only in lip-service, with insubstantial support measures to repay confidence in the sector.”

Non-essential retail in Wales will also have to shut as of midnight tonight, First Minister Mark Drakeford has said.