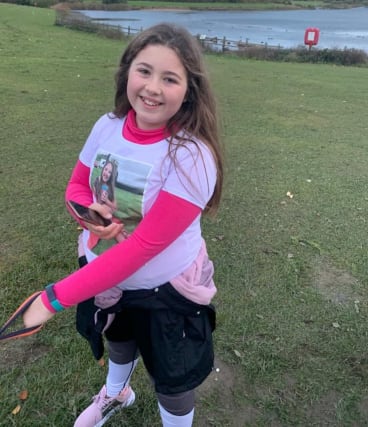 A 10-year-old girl with a debilitating spinal condition has completed an “incredible” fundraising challenge to raise money for an animal charity after her dog was saved by its vets.

Maisie Proctor said she was determined to raise funds for vet charity PDSA, despite living with the debilitating condition scoliosis, after they provided life-saving treatment for her beloved Dalmatian, Rio.

Animal-obsessed Maisie set out to walk 10 miles near her home in Wakefield, West Yorkshire, and now says she wants to be a zoologist.

She was diagnosed with scoliosis four years ago. It causes curvature of the spine and has left Maisie in daily pain.

Maisie’s mum, Leanne Proctor,  32, said: “She didn’t let that stop her and she carried on like a trouper.”

She said: “We are so proud of Maisie and her incredible achievement.

“She decided to take this on herself after PDSA saved our dog’s life.

“She saw those long ten miles through and has raised an incredible amount to give back to PDSA for their amazing work.”

Mrs Proctor described how the pandemic left her and her husband unexpectedly out of work for the first time in their lives so, when two-year-old Rio fell ill they turned to PDSA for help.

Mrs Proctor said: “It wasn’t long after we found ourselves out of work that Rio started acting strangely. He wasn’t drinking very much, constantly straining to wee and was unusually quiet and lethargic. We knew something was badly wrong.”

Mrs Proctor said: “We are all so incredibly grateful to the amazing PDSA vet teams for saving Rio – he means so much to all our family.”

PDSA vet Rachel Bishop, said: “If this condition had been left untreated it certainly would have been life-threatening for Rio, but thankfully he was brought to us just in time so we were able to give him the urgent treatment he desperately needed.”

Ms Bishop added: “I’d like to say a massive thank you to Maisie on behalf of PDSA.”

The charity said that, from the start of lockdown to September this year, its pet hospitals have carried out more than 546,000 remote appointments, performed more than 15,000 emergency and essential operations and 30,000 X-rays.