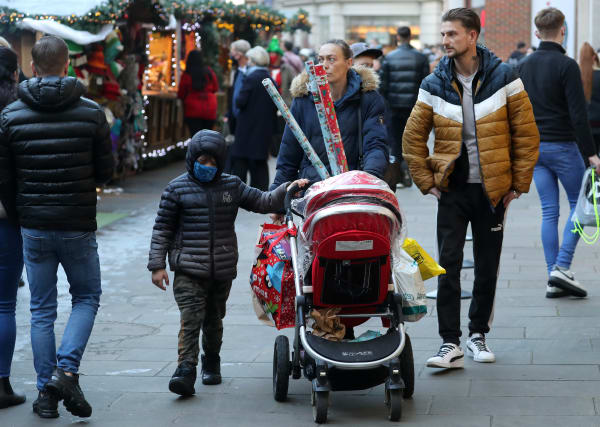 Surging coronavirus infections and fears over a mutant strain have seen Kent plunged from Tier 1 to Tier 4 in less than a month.

The county’s nearly two million residents will now effectively return to the lockdown rules of November.

The news comes as a blow with Christmas just days away and as the region reels from some of the highest infection rates in the country.

Scientists are also investigating a mutant strain of the virus that has been prevalent in the South East that may be up to 70% more transmissible.

One Conservative Kent MP said the fresh restrictions were “very hard” but that without them the region faced “a truly dangerous and terrible start to 2021”.

Under the new rules, non-essential shops, gyms, cinemas, hairdressers and bowling alleys will be forced to close for two weeks – while people will be restricted to meeting one other person from another household in an outdoor public space.

Two Kent districts are among the top five in England for Covid-19 infection rates, data analysis from the PA news agency shows.

He said: “It is very hard but if we are to enjoy Christmas and at the same time stay safe it is vital that everyone sticks to the restrictions that have been announced this afternoon.

“The alternative will be a truly dangerous and terrible start to 2021.”

Saturday’s announcement of a move to Tier 4 marks a new escalation for Kent as cases continue to rise.

The county began December in Tier 1, the lowest level of restrictions, before being moved to Tier 3 from December 2.

The further shift to Tier 4 will place yet more restrictions on the county’s population of about 1.9 million and see countless Christmas plans dashed.

Tracey Crouch, Conservative MP for Chatham and Aylesford, tweeted: “I feel quite down (personally & professionally) about tougher restrictions announced this afternoon but I also understand why this has happened.

“Our local hospitals have reached capacity, the virus & its new variant is rife in our community. Focus must be on vaccine roll out.”