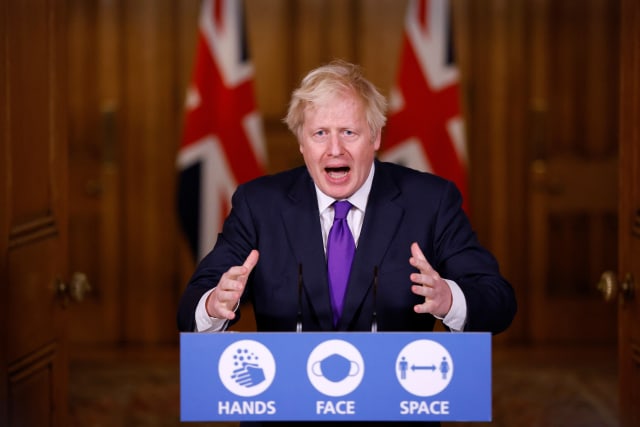 Coronavirus would barely have featured on the radars of British families last Christmas, but many plans for this year have been upended by the disease.

Covid-19 emerged in Wuhan in the province of Hubei, China, last November and was declared an international public health emergency by the World Health Organisation in January.

Its incredible spread across the world – now at 191 countries and territories – has seen more than 76 million people infected and nearly 1.7 million deaths, according to data from Johns Hopkins University.

Now, Christmas plans have been torn up for millions in England – with new Tier 4 restrictions seeing harsh curbs on planned meet-ups, while in the rest of England, Wales and Scotland, the proposed easing of restrictions for late December has been severely curtailed.

As recently as last week, Prime Minister Boris Johnson was suggesting people could have “a merry little Christmas”, with the proviso: “And I’m afraid this year I do mean little”.

He said it would be “inhuman” to ban Christmas entirely and confirmed the festive bubble policy allowing households to mix would remain in place despite warnings it will lead to more deaths, and accused Labour leader Sir Keir Starmer of wanting to “cancel Christmas”.

Back in March, Mr Johnson struck an optimistic tone, telling a Downing Street press conference he is “absolutely confident that we can send coronavirus packing in this country” and the tide can be turned within the next 12 weeks.

As the first lockdown was eased through June and into July, the Prime Minister said: “But even as we plan for the worst, I strongly believe we should also hope for the best.

“That means looking ahead with optimism – now extending our plan to lift the remaining national measures which have restricted our lives since March so we can get back to something closer to normal life.”

He made the comments on July 17, as he unveiled the next stage of a coronavirus recovery plan, adding: “It is my strong and sincere hope that we will be able to review the outstanding restrictions and allow a more significant return to normality from November, at the earliest, possibly in time for Christmas.”

A four-week national lockdown for England was announced at the end of October and came into effect on November 5, with Mr Johnson saying: “Christmas is going to be different this year, very different, but it is my sincere hope and belief that by taking tough action now, we can allow families across the country to be together.”

This aspiration of “as normal a Christmas as possible” was mentioned on the day Lockdown 2 came into force, while days later and following promising test results from the Pfizer/BioNTech vaccine, he spoke of the “distant bugle of the scientific cavalry coming over the brow of the hill”.

Last week, Mr Johnson said a “smaller Christmas is going to be a safer Christmas” and also suggested people should cut short their celebrations rather than enjoy the maximum permitted five days in a festive bubble.

The relaxation of social distancing rules across the UK was due to go ahead despite concerns about the possible impact on efforts to control the virus.

The original UK-wide plans would have seen three households allowed to form a festive bubble between December 23 and 27.

But Mr Johnson said those were the maximum limits rather than a target to aim for.

It would be “inhuman” to ban Christmas, he added, but there had probably not been similar curbs “since Cromwell’s time”.

He added: “With the vaccine, and all the other measures that we are taking, we do know things will be better in this country by Easter and I’m sure that next year Christmas will be as normal for every family in the country.”