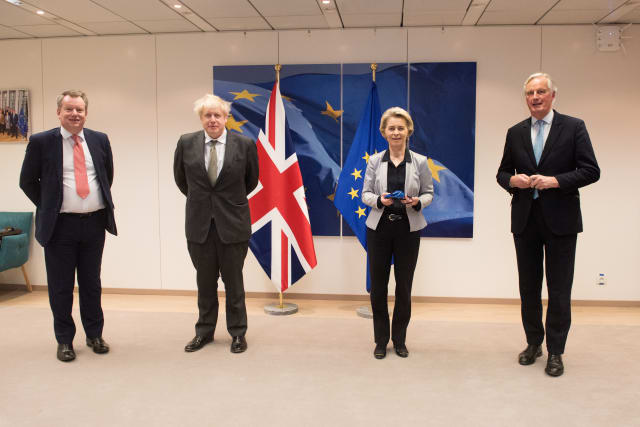 With negations on a post-Brexit trade deal between the UK and EU running down to the wire, here are the key issues:

– What is a level playing field?

London and Brussels have been stuck on so-called “level playing field” measures throughout the talks.

The “level playing field” is meant to ensure neither side can unfairly compete with the other on environmental standards, workers’ rights or state subsidies, and the legal mechanisms to govern any deal.

The UK has claimed the EU wants to have control over British sovereign rights and impose trade sanctions if London does not follow new regulations imposed by Brussels.

In exchange for continuing access to the single market, the EU is seeking a high degree of alignment by the UK with its standards on workers’ rights, the environment, and particularly state aid for businesses.

– What’s the big deal with fishing?

Boris Johnson has insisted that no British prime minister could accept EU demands to continue to maximise access to UK waters for its fishing fleets after the Brexit transition period expires on December 31.

The UK argues the UK is now an independent coastal state and should be able to prioritise its own boats.

Mr Johnson told MPs: “They (the EU) are saying that the UK should be the only country in the world not to have sovereign control over its fishing waters.

“I don’t believe that those are terms that any prime minister of this country should accept.”

– Why is the legal mechanism so tricky?

– What will change if there’s a deal by the post-Brexit transition expiry date of December 31?

The UK will keep dealing with the EU, its largest trading partner, on agreed terms.

And the UK will be able to cut trade agreements with other nations, such as the United States, without the say-so of the EU.

Prime Minister Johnson insists Britain would regain its sovereignty over its borders, finances and fishing policy.

Tariffs will apply, and there are likely to be hold-ups of imports from the EU, and exports to the continent at UK ports.

Britain will revert to World Trade Organisation (WTO) rules with the EU, which will mean the imposition of tariffs on imported and exported goods.

The flow of trade between the UK and EU will be hindered, with longer queues for lorries at ports.

Downing Street tries to present this as an “Australian-style” model, but it means tariffs and barriers on WTO terms.

Mr Johnson said on Friday that failing to broker a deal in time “may be difficult at first”, but he insisted the UK will “prosper mightily” and the nation must look to the “opportunities that will open up to this country in 2021”.

– Who’s doing all the negotiating?

Britain’s chief negotiator is Lord Frost, a Downing Street insider who appears to have the confidence of the Prime Minister.

The EU’s chief negotiator is the suave French former government minister Michel Barnier, who has been resolute in defending the bloc’s quarter in the talks.

Mr Barnier said on Friday there are “just a few hours” left in the Brexit talks.

He told the European Parliament that the two sides now stand at the “moment of truth” with a “very narrow” path to securing a breakthrough as talks resumed in Brussels.