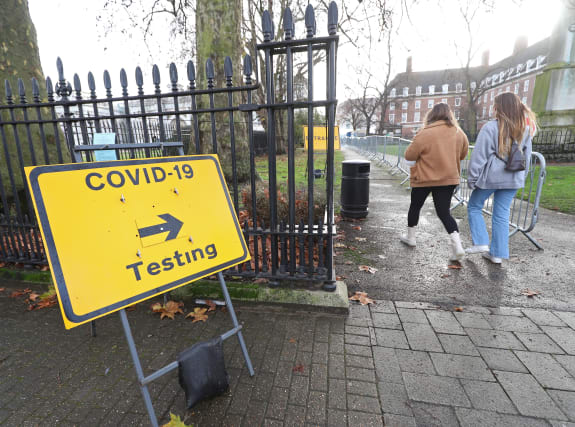 An estimated 567,300 people in private households in England had Covid-19 between December 6 and 12, new data shows.

But the Office for National Statistics (ONS) figures, published on Friday, show that this is still less than the peak of an estimated 664,700 people – one in 80 – between November 8 and 16.

The Coronavirus Infection Survey suggests that the percentage of people testing positive is rising in all four nations in the UK.

The Infection Survey also shows that the proportion of people testing positive for Covid-19 is estimated to have increased sharply in London, with other increases in eastern England, the East Midlands and south-east England.

Rates have continued to decrease in north-west England and Yorkshire and the Humber.

The East Midlands has the highest rate, with an estimated 1.4% of people in private households testing positive for Covid-19, followed by London at 1.4% and north-east England at 1.2%.

South-west England has the lowest rate at 0.4%.

“The South West has a much lower proportion of people testing positive compared with all other regions.

“Over the most recent week, the percentage of people testing positive has sharply increased in London, with other increases in the east of England, east Midlands and South East.”

When modelling the level of infection among different age groups in England, the ONS said rates have increased in most age groups, except for young adults – school Year 12 to age 24 – and 50-69 year-olds.

Rates had been decreasing among young adults, but this trend appears to have levelled off, the ONS said.

Katherine Kent, co-head of analysis for the Covid-19 Infection Survey, said: “Data from last week shows an increase in the percentage of people testing positive for Covid-19 in England, with a sharp increase in London and increases in the east of England, east Midlands and the South East.

“Rates in the North, which has until recently had the highest infection levels, continue to decline.

“Rates in most age groups have increased and continue to remain highest in secondary school age children.

“Across the UK, infections appear to be increasing in both Wales and Scotland, in Northern Ireland the percentage of people testing positive appears to no longer be decreasing.”

The figures do not include people staying in hospitals, care homes or other institutional settings.