Charles tells of fascination with archaeology during museum visit 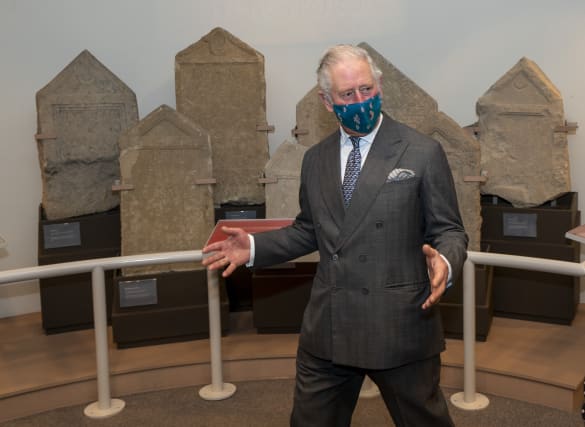 The Prince of Wales has spoken of his fascination with archaeology and history during a visit to a museum dedicated to one of the largest Roman settlements in Britain.

Charles was at the recently opened Stone Age to Corinium Gallery at the Corinium Museum in Cirencester, Gloucestershire.

The displays depict the story of life in the Cotswolds, from 40,000 years ago right up to the early Corinium era, including Bronze Age and Iron Age artefacts.

“I am fascinated by all these things. First time I have visited,” Charles said.

“I never had a chance to see it before. I am fascinated by it.”

He spent his first year at Trinity College, Cambridge, studying archaeology and physical and social anthropology. In his second year he switched to history.

The newly opened displays hold more than 600 objects and artefacts charting the Stone Age, Bronze Age, Iron Age through to early Roman times and the development of the town of Corinium.

He also saw the Orpheus mosaic; the museum boasts the largest concentration of mosaics in the UK outside London.

During a tour of the medieval collection, the prince told staff about a pair of shoes he owned made from reindeer leather discovered in the wreck of the Danish vessel Catherina von Flensburg, which went down in a storm in 1786 off the coast of Plymouth.

“I got a pair of shoes out of it. It was amazingly reindeer leather, remarkable quality,” he added.

The shoes were made by New & Lingwood, a men’s shop in Jermyn Street, central London, which is thought to have donated a pair to the prince as the leather was found within the Duchy of Cornwall, his private estate.

Before leaving, he signed the guest book and was presented with a bottle of IV Bodicacia golden ale, brewed by Corinium Ales for the museum.

Speaking afterwards, Ms Hart said: “It was a really, really special moment for me and to have that opportunity to show His Royal Highness our collections and talk about our work here.

“I have worked at the museum for over 20 years and to get that moment was really special for me.

“He made me feel really at ease and he was laughing and joking and had a genuine interest about the collections, the archaeology and the history of the area.”

Ms Hart described the last year as “really difficult” for the museum, which required emergency funding because of the Covid-19 pandemic.

“We are not over it either, and I can see this continuing well into next year,” she said.

“It’s really imperative we get the message out that we are a Covid-19-safe environment and people need to visit, and if people don’t come through the doors we will remain at risk.”