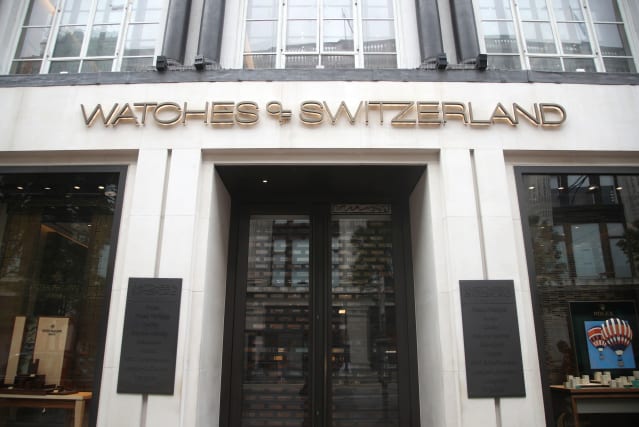 Luxury retailer Watches of Switzerland has blasted the Government for “misjudging” the move to scrap tax-free shopping for tourists, but upped its full-year sales outlook for the second time in two months.

The group said a better-than-expected performance over its first half and ongoing strong trading meant full-year sales are now set to come in at up to £925 million.

Watches of Switzerland (WoS) – Britain’s biggest retailer of Rolex, Cartier, Omega, TAG Heuer and Breitling watches – previously pencilled in between £880 million and £910 million, having hiked its guidance in October.

This comes despite the impact of the Government’s decision to remove tax-free shopping in the UK from January 1, as well as the possibility of further lockdowns in January and February.

WoS chief executive Brian Duffy took aim at the Government for the blow to tax-free shopping.

He said: “We believe that the UK Government has misjudged the impact of removing tax-free shopping for tourists and we will continue to support all efforts to have this changed.”

The Government said earlier this year that it would end the VAT Retail Export Scheme (VAT RES), which allows overseas visitors reclaim the VAT they pay on goods purchased but not consumed in the UK.

WoS announced that it would repay £8.9 million of furlough support from the Government as it swung to a £36.2 million pre-tax profit for the six months to October 25 from losses of £9 million a year earlier.

Total sales fell 3.4% as the pandemic had a heavy impact on its first quarter, but sales surged 19.8% in its second quarter, while online saw 65.4% growth over the first half.

WoS added that its third quarter had also got off to a strong start in spite of the second lockdown across England, with group sales up 11.2% over the seven weeks to December 13.

Mr Duffy said: “Despite significant headwinds throughout the period, we achieved a good sales performance with domestic customers offsetting lower tourist and airport sales in the UK, and elevated momentum in the US.”

Shares in the firm lifted 4% on Thursday morning after the results.

Independent retail analyst Nick Bubb said the performance shows “the luxury watch market continues to operate on a different planet from the rest of retailing”.