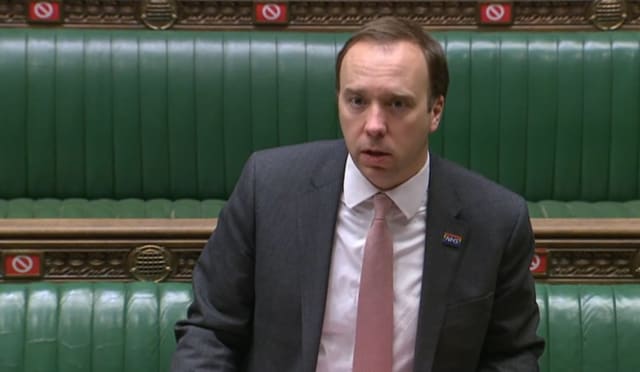 More than two-thirds of England’s population will be living under Tier 3 restrictions from Saturday amid rising concern about the spread of coronavirus in the run-up to Christmas.

Health Secretary Matt Hancock placed large parts of southern and eastern England into the top tier and dashed hopes in northern regions of an easing of restrictions.

Mr Hancock told MPs he regretted having to impose the curbs but “there is a strong view right across Government that these actions are necessary”.

Under Tier 3 conditions pubs and restaurants can only offer takeaway or delivery services and indoor entertainment venues are shut.

Bedfordshire, Buckinghamshire, Berkshire, Peterborough,  Hertfordshire, Surrey (with the exception of Waverley), Hastings and Rother (on the Kent border of East Sussex), and Portsmouth, Gosport and Havant in Hampshire will all move into Tier 3.

The changes mean a total of 38 million people will be living in Tier 3 from Saturday – 68% of the population of England.

The little good news came for Bristol and North Somerset, which will move from Tier 3 to Tier 2.

Herefordshire will go down into Tier 1, although the county’s public health director raised concerns about the relaxation of measures there.

The announcements added to unease on the Tory benches about the Government’s response to the pandemic.

Tory MP Stephen McPartland said it was “ridiculous” and “totally unacceptable” that his Stevenage seat was “being dragged into Tier 3”.

Sir Graham Brady, chairman of the influential 1922 Committee of Tory backbenchers and a Greater Manchester MP, questioned what more the region could do to get out of Tier 3.

“The statement will be greeted with dismay in Greater Manchester where we have had severe restrictions for nine months – where in nine of the 10 boroughs rates are below the national average,” he said.

Former minister Steve Baker, the deputy chair of the Covid Recovery Group of lockdown-sceptic Conservatives, said: “After a full and damaging national lockdown, millions more people and businesses across the country are heading into tougher restrictions.

“The Government must urgently clarify what the criteria are for moving areas between, and especially down, the tiers.”

The latest areas to join Tier 3 come after London and parts of Hertfordshire and Essex were placed under the top level of restrictions earlier this week.

Covid-19 case rates are rising in all but one region of England, according to the latest weekly surveillance report from Public Health England.

The only region that recorded a week-on-week fall was Yorkshire and the Humber, where the rate dropped slightly from 153.6 to 148.5.

Mr Hancock said: “I regret having to take the action that we have to take.

“I deem it necessary and there is a strong view right across Government that these actions are necessary.”

He urged people to take “personal responsibility” for their actions to help curb the spread of the virus.

The cautious approach to the tiering arrangements comes after warnings that the relaxation of measures between December 23 and 27 could lead to increased cases and deaths.

Labour leader Sir Keir Starmer told reporters that he was concerned the tier system was “just not strong enough to control the virus”.

Greater Manchester mayor Andy Burnham said he was “not surprised but very disappointed” to remain in Tier 3.

Mr Hancock said the Government “looked very closely” at the area but there continues to be “significant pressure” on the NHS in the north-west.

“I think the relaxation of the rules now, just ahead of the Christmas mixing and the further relaxation that is inevitably going to result in more infections. It feels like it is too soon,” she told BBC Radio 4’s World at One.

Gerald Vernon-Jackson, the Liberal Democrat leader of Portsmouth City Council, said the decision to put the Hampshire city into Tier 3 was “bizarre” when other authorities that required care provided by the city’s Queen Alexandra Hospital had not been moved up.

– The Government announced that the return to class of secondary school and college pupils’ in England will be staggered in the first week of January to allow headteachers to roll out mass testing of children and staff.

– Cwm Taf Morgannwg University Health Board became the third in Wales to suspend non-urgent care, saying pressure had increased on services in Bridgend, Rhondda Cynon Taf and Merthyr Tydfil in the last week as the equivalent of almost four people acquired the virus every 10 minutes.

– The furlough scheme was extended for an extra month until the end of April with Government loan schemes extended two months until the end of March in a sign that ministers fears the economy will still need support into the spring.