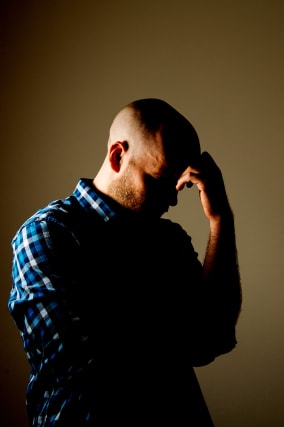 One in 10 men in the UK has suicidal thoughts when feeling worried or low – double the level from 2009, according to a study.

But men are now almost three times more likely to see a therapist about such problems as they were a decade earlier, research from mental health charity Mind revealed.

The report – Get It Off Your Chest: Men’s mental health 10 years on – was commissioned by Mind under its partnership with the English Football League (EFL), and has led to calls from the charity for more Government funding of NHS mental health facilities aimed at men.

The study, conducted before the Covid pandemic in September last year, compares data with the same YouGov survey from 2009 to understand how men’s mental health has changed.

One in 20 men reported suicidal feelings when low or worried in the first survey, and the rate from the 2019 survey stood at 10%.

The figures reflected a rise in certain coping mechanisms, such as drinking alone (up from 9% to 13%) and taking recreational drugs (up from 1% to 4%).

However, aside from being three times more likely to see a therapist, men were also far more willing to seek support from their GP, rising from 23% to 35% to match the rate for women, which increased from 33%.

The survey found 43% of men admitted to regularly feeling worried or low, compared with 53% of women. This represented a 6% rise for men – more than double the rise reported by women.

“This suggests that the stigma around seeking support is lessening, with awareness-raising campaigns such as Time to Change challenging stereotypes of the ‘strong, silent’ man,” the report said.

Paul Farmer, chief executive of Mind, said: “It’s really positive that men are more likely to seek help from the NHS and talk to friends and family about their mental health than they were 10 years ago.

“As a society, we have become more open about mental health in the last decade as campaigns such as Time to Change and Mind’s partnership with the EFL have helped to shift stigmatising attitudes and behaviours, and this may be beginning to filter through.

“Men still tell us that they struggle to get the help they need for their mental health. Sometimes they don’t know where to go for help or what’s on offer might not be suitable for them.

“The challenges facing men are likely to be compounded by the pandemic as well as the economic recession, not least because we know that men’s mental health tends to be more affected by unemployment.”

Mr Farmer added that more education could be needed about further options for men to improve their mental health, such as physical and social activities.

“Ultimately, men are still three times as likely to take their own life as women, so there is much more to do to make sure men can ask for help and can get the right support when they need it and before reaching crisis point,” he said.

“We call on the Government to respond to this unmet need urgently and for the NHS to be funded to provide a better range of mental health services tailored to the needs of men.”

Mind cited figures from the Office for National Statistics showing three-quarters of deaths registered as suicide in England and Wales in 2019 were men, accounting for 4,303 deaths.