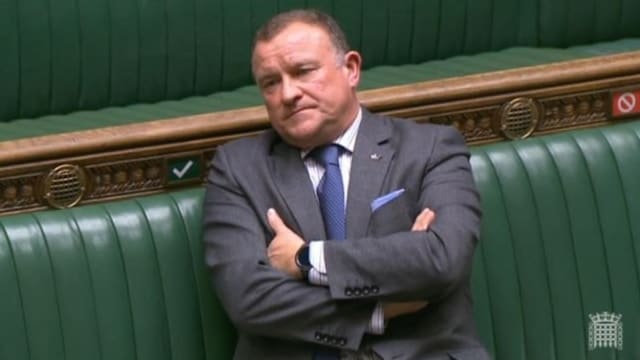 Jacob Rees-Mogg has described the actions of an MP who picked up the parliamentary mace in a Brexit protest as “silly” and “childish”.

The SNP’s Drew Hendry, the party’s business spokesman, was suspended from the Commons on Wednesday after protesting against the UK Internal Market Bill.

As proceedings on the Bill came to a conclusion, Mr Hendry shouted “this is an outrage” and refused to resume his seat, before picking up the parliamentary mace and attempting to walk out.

The mace is the symbol of royal authority and without it neither House can meet or pass laws.

On Thursday, the House of Commons confirmed that the MP for Inverness, Nairn, Badenoch and Strathspey would be suspended for five sitting days as a result of his actions.

It will include any days in which Parliament may be recalled in the event that there is a breakthrough over a Brexit deal.

During business questions, SNP chief whip Patrick Grady had urged Mr Rees-Mogg to enable remote participation in Parliament proceedings to be switched back on.

Mr Rees-Mogg told MPs: “(Mr Grady) asks for things to be switched back on, but we have to be here to do our job properly.

“It’s one of the most ridiculous sights seen in this House in recent years and I thought on behalf of the SNP, (Mr Grady) who is a fine parliamentarian, was going to stand up and apologise for that really silly, childish, babyish display yesterday.”

As Mr Rees-Mogg referred to the actions of Mr Hendry, Tory MP Sir Charles Walker (Broxbourne) could be heard from the backbenches saying: “Off with his head!”

Following the protest by Mr Hendry, the SNP’s Mike Russell, the Constitution Secretary for the Scottish Government, praised Mr Hendry for “speaking truth to power”.

“The Bill is undemocratic and undermines the rights of all Scottish & Welsh citizens. Legislative consent has been rejected by @ScotParl & @SeneddWales.

“The Tory UK Government should have withdrawn it.”

The Bill sets out how trade within the UK will operate post-Brexit, but critics feared the legislation in its original form represented a power grab by Westminster at the expense of Scotland, Wales and Northern Ireland.