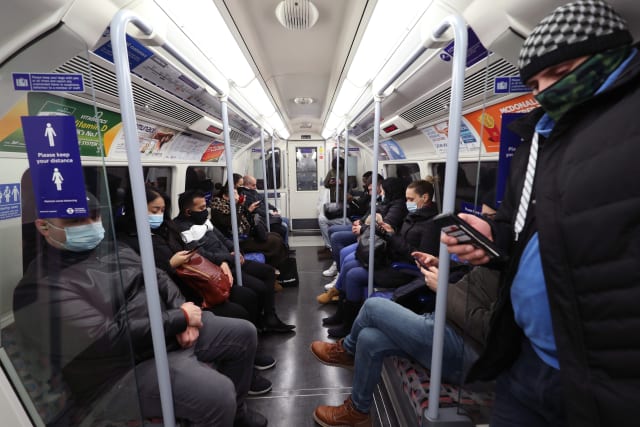 Relaxing coronavirus restrictions over Christmas could lead to an “unrelenting tsunami” of cases, a nursing chief has warned, as swathes of southern and eastern England prepare to enter the top tier of Covid-19 restrictions.

More than two-thirds of the population will be living under Tier 3 measures from Saturday as the Government tries to stem rising infections which have led to fresh concerns about households mixing over the festive period.

Dame Donna Kinnair, chief executive and general secretary of the Royal College of Nursing, said ministers should give “fresh and more detailed” advice to the public with a week to go until Christmas.

“After a difficult year, it is everybody’s instinct to want to be together and see loved ones – especially those who live far apart or feel isolated. But what is at stake is coming into sharp focus,” she said.

“Travelling and family visits associated with this time of year will undoubtedly lead to more cases, more pressure on NHS and care services, and more deaths. By turning the second and third waves into an unrelenting tsunami, we would begin 2021 in the worst possible way.”

She said nurses would not enjoy Christmas “knowing what awaits them in January” and called on the Government to be “clearer about the risks – not just the rules”, warning: “This virus isn’t taking Christmas off and nor should we.”

Up to three households are able to mix between December 23 and 27, while travel to and from Northern Ireland is also permitted on December 22 and 28.

In a bid to control the spread of coronavirus, Health Secretary Matt Hancock announced on Thursday that Bedfordshire, Buckinghamshire, Berkshire, Peterborough, Hertfordshire, Surrey (with the exception of Waverley), Hastings and Rother (on the Kent border of East Sussex), and Portsmouth, Gosport and Havant in Hampshire will all move into Tier 3.

Under the top level of restrictions, pubs and restaurants can only offer takeaway or delivery services and indoor entertainment venues are shut.

The changes mean a total of 38 million people will be living in Tier 3 from Saturday – 68% of the population of England.

A little good news came for Bristol and North Somerset, which will move from Tier 3 to Tier 2, while Herefordshire will go down into Tier 1, although the county’s public health director raised concerns about the relaxation of measures there.

The announcements added to unease on the Tory benches about the Government’s response to the pandemic, with Steve Baker, deputy chair of the Covid Recovery Group of lockdown-sceptic Conservatives, calling for clarity on how areas move between tiers.

Elsewhere in the UK, ministers in Northern Ireland agreed to introduce a six-week lockdown from Boxing Day to curb rising cases – with the closure of non-essential retail and contact services, as well as restricting the hospitality sector to takeaway only.

Welsh First Minister Mark Drakeford warned that “small acts of selfishness” on an individual level were adding up to the problems seen in Wales, as he predicted in an interview with the BBC that other parts of the UK may need to introduce stricter restrictions after Christmas.

And in Scotland, Deputy First Minister John Swinney said tougher coronavirus restrictions after the festive period – including a potential lockdown – is a “possibility” due to a “rising tide of Covid”.

– A further 532 people died within 28 days of testing positive for Covid-19 and as of 9am there were a further 35,383 confirmed cases, including 11,000 from Wales which were not recorded in official figures between December 9 and 15 due to a computer glitch.

– The Government announced that the return to class of secondary school and college pupils’ in England will be staggered in the first week of January to allow headteachers to roll out mass testing of children and staff.

The latest areas to join Tier 3 come after London and parts of Hertfordshire and Essex were placed under the top level of restrictions earlier this week.

Covid-19 case rates are rising in all but one region of England, according to the latest weekly surveillance report from Public Health England.

The only region that recorded a week-on-week fall was Yorkshire and the Humber, where the rate dropped slightly from 153.6 to 148.5.

Mr Hancock said: “I regret having to take the action that we have to take. I deem it necessary and there is a strong view right across Government that these actions are necessary.”