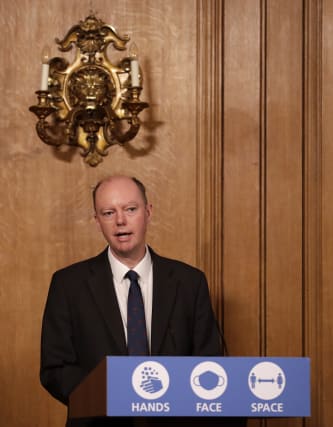 England’s chief medical officer has compared risking seeing the maximum number of households allowed over Christmas to speeding down an icy road at 70mph.

Professor Chris Whitty got on board with the transport analogies driven by his deputy, Professor Jonathan Van-Tam, as he gave advice for the Christmas period at a Downing Street press conference.

Among other metaphors, Prof Van-Tam has evoked planes and trains to describe vaccine progress at previous briefings.

On Wednesday, Prof Whitty warned if every household opted to meet as many people as legally allowed during Christmas, there would be a “significant problem” and urged people to do the “minimum necessary” instead.

He said: “This is the equivalent of us saying these are icy and treacherous conditions, if you wish to have a driving analogy, we should be doing the minimum necessary still within the law.

“Just because you can doesn’t mean you should.

“Obviously if everybody pushes it right to the limit in every single household that would be a significant problem but I think it is very unlikely that will happen.”

He added: “I do not think everybody is going to take it to the limit, I think people are being as always, as they have all the way through this, are going to be incredibly responsible about it in the great majority of cases.”

Prof Van-Tam has previously spoken about his fondness for metaphors and how they help with people’s understanding of the Covid-19 pandemic.

In November, he likened vaccine progress to the tricky “glide path” of a plane coming in to land.

Prof Van-Tam told a press briefing: “Do I believe that we are now on the glide path to landing this plane? Yes I do.”

He added: “Do I accept that sometimes when you are on the glide path, you can have a side wind and the landing is not totally straightforward, totally textbook? Of course.”

Prof Van-Tam has also said the whole process is similar to what so many Britons have been familiar with for years – waiting to board a crowded train.

“This to me is like a train journey, it’s wet, it’s windy, it’s horrible.

“And two miles down the tracks, two lights appear and it’s the train and it’s a long way off and we’re at that point at the moment.

“Then we hope the train slows down safely to get into the station, that’s the safety data, and then the train stops.

“And at that point, the doors don’t open, the guard has to make sure it’s safe to open the doors. That’s the MHRA, that’s the regulator,” he said.

Warming to the theme, he added: “And when the doors open, I hope there’s not an unholy scramble for the seats.

“The JCVI has very clearly said which people need the seats most and they are the ones who should get on the train first.”

Football fan Prof Van-Tam also compared the Pfizer vaccine trial results with a penalty shoot-out in November, and has continued the comparison over recent weeks.