Refusing Covid jab would be very silly, says latest pensioner to be vaccinated 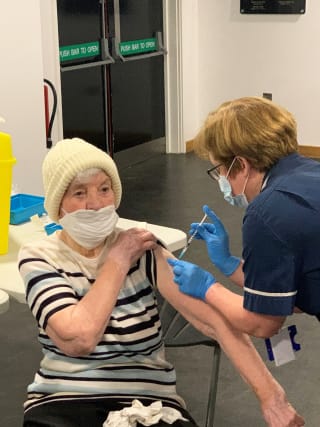 A 94-year-old great-great grandmother has said people will be “very silly” if they turn down the chance to have a Covid-19 vaccine, after she became one of the first wave of pensioners to receive the jab.

Joyce Dowd said she hopes the vaccination she had at a new GP-run centre in Doncaster, South Yorkshire, will mean she will soon be able to see her great-great grandchild, who was born during the pandemic, for the first time.

She has another great-great grandchild – her fourth – due in February.

But Mrs Dowd, who lives in the Hexthorpe area of Doncaster, said she will not see the infants until she is sure it is safe.

“I’ll see them when times are good,” she said. “I’d rather them be safe and keep away because it’s asking for trouble, isn’t it?

“You’ve got to think safety-wise because it’s no good if you don’t.”

Mrs Dowd said she felt fine after having the jab at around 8am on Wednesday.

She said: “It feels a little bit stiff but it doesn’t hurt. There’s no worries to it.

“If people don’t have it done, they’re being very silly. At our age you can pick anything up.”

Mrs Dowd lives by herself and was brought to the centre, which is just outside Doncaster town centre, by one of her neighbours.

“I’d rather them be safe and keep away because it’s asking for trouble,” she said.

Mrs Dowd said she is looking forward to when the family can get together, but added: “I hope they don’t all come at once.”

Dr Kate Mansfield, who is a GP at the Scott Practice in Doncaster and the clinical director of Doncaster Central Primary Care Network, said: “It’s been a bit of a crazy week.

“It’s been amazing to see just how hard everybody’s been working. I’m just so proud to be part of it, just seeing how dedicated everybody is.

“The hours and hard work that people have been putting in to get this going is unbelievable.”

Dr Mansfield said a lot of work has taken place to ensure the seven practices involved in the network are able to continue offering a normal service alongside the vaccine rollout.

She said: “It’s a busy time of year anyway for us now. It’s been difficult. It’s been a massive challenge. But I’m just so pleased how it’s come together.”

Dr Mansfield said 975 jabs will be administered at the centre over the next three days.

“They all seem very keen and excited and pleased that they’re in that first batch,” she said.

“It’s an exciting day, it really is.”

Dr Mansfield said she is keen to reassure everyone about the safety of the vaccine and encourage a high take-up of it.

She said: “I feel like it’s our role to put the true facts out there as we know them and give people the right information so that they can make an informed decision. I know I’ll be having the vaccine and I’ll be encouraging my family to have the vaccine.”

Two GP-led primary care networks have now started vaccinating in Doncaster with three others expected to go live in the coming weeks.