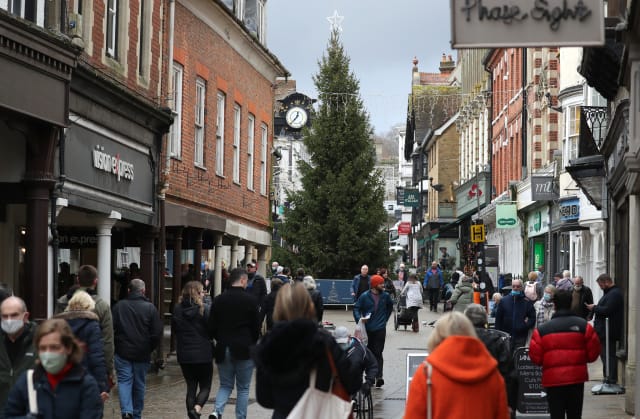 The relaxation of social distancing rules across the UK is expected to go ahead despite warnings about the possible impact on efforts to control the virus.

The original UK-wide plans would have seen three households allowed to form a festive bubble between December 23 and 27.

But in Wales, people are being advised to limit their bubbles to two households, while in Scotland the guidance on what people should do is being strengthened.

At Prime Minister’s Questions, Boris Johnson said it is right to “stress the importance of people taking care this Christmas”, particularly due to the risk of asymptomatic transmission of coronavirus.

He told MPs: “We should exercise extreme caution in the way we celebrate Christmas.”

Mr Johnson told MPs there was “unanimous agreement” across the four nations “that we should proceed in principle with the existing regulations”.

“We don’t want to criminalise people’s long-made plans,” he said.

But as Mr Johnson claimed unanimity across the four nations, Welsh First Minister Mark Drakeford set out his decision to deviate from the previously agreed approach.

He said: “Here in Wales, the position is that only two households should come together to form an exclusive Christmas bubble during the five-day period.

“The fewer people we mix with in our homes, the less chance we have of catching or spreading the virus.”

Mr Drakeford said a joint four-nations statement was still expected, but would not say whether the two-household guidance would apply across the UK.

The price of the relaxed restrictions will be a tougher lockdown in Wales from December 28.

Scotland’s First Minister Nicola Sturgeon recommended that those people forming a Christmas bubble should only meet up on one day and not stay overnight “unless it is unavoidable”.

She said: “Firstly and unequivocally the safest way to spend Christmas this year for you and for those you love is to stay within your own household and your own home.

“My strong recommendation is this is what you should do if at all possible.”

The UK Government’s Communities Secretary Robert Jenrick suggested people may decide to “keep it small” and put off larger gatherings until the spring, saying: “Easter can be the new Christmas.”

Ministers hope that the rollout of a vaccine and improved testing availability will help life return to something closer to normal in the spring.

The first vaccination figures showed almost 138,000 people in the UK have received the jab so far.

Pressure to cancel the Christmas plans has mounted in recent days due to the ongoing challenge in controlling the spread of coronavirus.

Linda Bauld, professor of public health at the University of Edinburgh, said the easing was a “bad idea” and that people needed to be “incredibly cautious”.

“I think, to avoid the preventable deaths that we’re going to have in January as a result of this, we shouldn’t be doing it, but if we do do it then I think we need to do it in the most modest way possible,” she told BBC Breakfast.

Professor Graham Medley, a member of the Government’s Scientific Advisory Group for Emergencies (Sage), said the impact of the relaxation was “really uncertain”.

“There are two things happening over the period: one is that most workplaces and schools are closed, so that will result in reduced contact,” he told the BBC Radio 4 Today programme.

“On the other hand, if we all mix together and have a normal Christmas then we know that in a normal year most respiratory diseases and hospital admissions increase after Christmas anyway in a non-Covid year, so there’s clearly a risk, but it really very much depends on what people do.

“It’s very hard to predict and say ‘oh yes, this is going to be a disaster’ or ‘nothing is going to happen’ because it really does depend on what people decide do.”

A snap YouGov survey of 3,856 adults found 57% believed the plans should be dropped and the current rules remain in place during the festive period.

Some 31% said the easing should go ahead as planned, while 12% said they were unsure.

The focus on Christmas arrangements came as around 10.8 million more people began living under England’s toughest restrictions as London and parts of Essex and Hertfordshire moved into Tier 3.

With 61% of England’s population now living under the strictest measures, ministers are due to formally review which tiers are appropriate for each area.