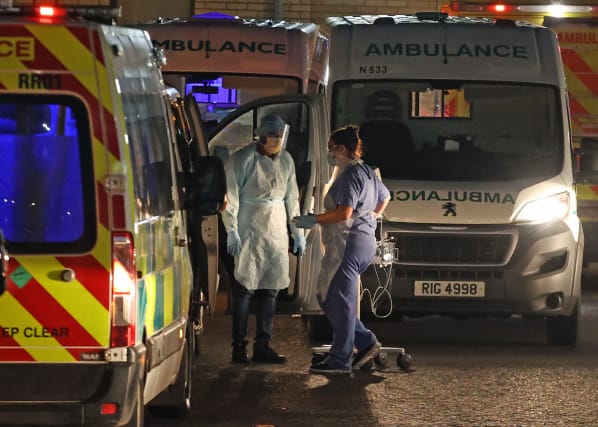 Northern Ireland requires “extreme and robust” coronavirus restrictions to halt the spread of the virus, the health minister has warned.

Robin Swann will seek the backing of fellow ministers for new Covid-19 measures when the powersharing Executive meets on Thursday.

Mr Swann declined to be drawn on Wednesday whether he would be recommending an intervention before or after Christmas.

“I can say we will be looking for extreme and robust interventions to get us back into a place where we should be,” he said.

Deputy First Minister Michelle O’Neill signalled that she will support whatever is brought forward by Mr Swann and public health advisers, insisting it was important to make the “right decision” and “not the popular one”.

Ms O’Neill said there was “no doubt” an intervention was required.

“I am up for doing whatever is required, so I’ll work with Executive colleagues tomorrow to try and arrive at a position that actually delivers that.”

First Minister Arlene Foster said she did not think Mr Swann would recommend new restrictions for the period prior to Christmas.

“I don’t think he will be proposing closing down before Christmas but we will of course look to see what Robin and his team of advisers have to say to us, I don’t want to prejudge what he is going to say to us tomorrow but we are in a serious situation,” she said.

“Unfortunately the last two weeks don’t appear to have brought the R number down below 1, there is a diminishing return in terms of restrictions, people are out and about now and so there is a very great need for people to have personal responsibility.”

Mrs Foster and Ms O’Neill earlier participated in a call with other devolved leaders in the UK about plans for allowing more household mixing for five days over Christmas.

The leaders are facing intensifying calls to rethink the Christmas relaxations amid fears they could trigger a major spike in cases in January.

Case numbers continue to rise in Northern Ireland despite a recent two-week circuit-break.

A further eight Covid-19 related deaths were announced on Wednesday, along with 510 new cases of the virus.

Hospital capacity across the region stood at 105% on Wednesday.

On Tuesday, queues of ambulances were witnessed at accident and emergency departments (EDs) across Northern Ireland as patients were treated in car parks due to a lack of capacity inside the hospitals.

At one point outside Antrim Area Hospital, 17 ambulances containing patients were lined up outside the ED.

Mr Swann told his weekly Stormont media briefing that the region faced some “very dark hours” before the full rollout of the vaccine delivered relief from the virus.

“Its threat will hang over all our Christmases and will cast a shadow well into January,” he said.

“We are once again at a really critical period. Our hospitals, our wider health and care system are already under immense pressure and there are growing fears that January could be much worse.”

He added: “Decisive action is required. People will look to the Executive for what I believe will be a robust intervention and rightly so.”

Asked if the Executive had eased circuit-breaker restrictions too soon, Ms O’Neill said: “We followed the public health advice the whole way through, I wouldn’t have done anything unless it was supported by the chief medical officer and chief scientific adviser and that will be the position again tomorrow.

“But I would make a strong case that we clearly need an intervention, it’s the timing of when that can be most effective that we need to consider, but I don’t think there is any doubt that an intervention is required.”

Mrs Foster and Ms O’Neill both expressed concern at pressures on the health service.

“It’s not where we want to be, and of course we always have winter pressures this time of the year, but Covid-19 has exacerbated that,” Mrs Foster said.

Ms O’Neill added: “It is totally unacceptable that people are being cared for in the back of ambulances but that shows you our health service is under huge pressure so it is very clear to me that what we need is to have an intervention, what that looks like we will discuss at the Executive tomorrow.”

Northern Ireland’s leaders spoke to media separately during a visit to Newry on Wednesday to support the Black Santa appeal.

John Dalzell, 79, stages a sit-out in the city centre every Christmas to raise money for the Southern Area Hospice.