Mixed messaging: The Government’s changing advice during the pandemic 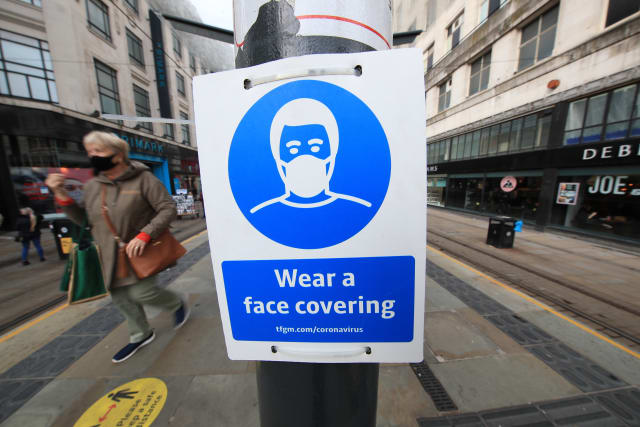 The Government announcing new Christmas guidance, without changing the rules for England, has cast fresh uncertainty over how people should act during the festive period.

The tension between advice and law, and their interpretation by the public and authorities, has triggered confusion throughout the Covid-19 pandemic.

Commenting on Christmas, Professor Stephen Reicher, from the University of St Andrews – who sits on a sub-group of the Scientific Advisory Group for Emergencies (Sage), said “policies send huge messages”.

He argued that allowing Christmas bubbles sent a strong message that “it’s OK to meet”, which increased the number of people who planned to get together.

“Not changing the rules underscores that message and will probably drown out any caveats about ‘it’s a maximum’,” he said.

“After all, nearly everybody hears the policy, relatively few listen to the briefings.”

Here are some other instances this year where pandemic advice has appeared to give mixed messages:

Early in the pandemic, the Government was reluctant to enforce the wearing of face coverings, with experts warning they could give a false sense of security and improper use could increase the spread of infection.

They were made mandatory for travelling on public transport in England in June, but it was not until July, some four months after the country went into lockdown, that they became obligatory in shops.

The latter policy came after weeks of mixed messaging and was branded “confusing” as shop staff were at the time not required to cover their faces.

Industry bodies called for clarity over whether face coverings were required in takeaways and sandwich shops in England after contradicting statements from within Government.

A later U-turn in August saw face coverings becoming required for secondary pupils and staff in communal areas of schools in local lockdown areas of England, despite the Education Secretary insisting they were not required.

The launch of the Eat Out to Help Out subsidy scheme in August saw people encouraged to visit their local pub or restaurant hit hard by the first lockdown.

More than 100 million meals were eaten under the scheme, but by October the Prime Minister said the incentive “may have helped to spread the virus” and that its impact needed to be counteracted.

The hospitality sector has since been blighted by November’s second national lockdown in England and the ongoing tier system of restrictions, which can see rules change at short notice.

Advice on who should work from home and when has also shifted throughout the pandemic.

In May, the Prime Minister faced criticism when announcing the initial easing of lockdown and changing the Government’s central message from “stay at home” to “stay alert”.

Mr Johnson said people should be “actively encouraged” to return to work, but avoid public transport.

Labour, unions and businesses demanded urgent clarity and guidance on safe workplaces as people were given 12-hour notices that they should return to their jobs.

By September, plans to get employees back into their workplace in a bid to revive the economy were scrapped, with Mr Johnson telling office staff to work from home if they could.

Efforts to get 80% of civil servants back working in Whitehall also appeared to be abandoned, after they were attacked by unions.

Confusion has also reigned at times over how people can enjoy the outdoors during periods of lockdown.

In April, during lockdown, police guidelines suggesting the public could visit the countryside to exercise were labelled “hugely unhelpful” as they could undo efforts to prevent the spread of coronavirus across rural Britain.

In the same month, police were told in guidance that people who sat on park benches for too long were likely to be breaking coronavirus lockdown rules.

By May, sunbathers were being urged not to linger outdoors during warm weather while restrictions were in place.

But following the easing of restrictions on how far people could go to get to the countryside, National Parks and beaches in England, thousands flocked to seaside towns.

It led to councils urging people to stay away from their areas.

In May, Mr Johnson’s then top adviser Dominic Cummings was accused of flouting lockdown rules by travelling to County Durham.

Mr Cummings cited the need for childcare and concerns around safety at home as reasons for deciding to make the trip, insisting he acted “reasonably and legally”.

Police concluded he may have committed “a minor breach” of lockdown rules, but he faced no further action.

Lockdown guidance stated people were not permitted to stay overnight anywhere other than their main home – including travelling to second homes.

It said people could only go out for work, if it could not be done from home, shopping for essentials, exercise, medical needs, escape risk of harm and to help a vulnerable person.

No mention of travelling long distances so that childcare could be provided by relatives was included in the Government’s published guidance.

In April, the health secretary Matt Hancock set an ambitious goal of reaching 100,000 coronavirus tests per day in England by the end of the month.

He later declared hitting the target an “incredible achievement”, but questions were raised over how the tests were counted, after changes meant newer home test kits were counted while being dispatched.

The overall total included tests dispatched to “satellite testing locations” – such as hospitals – but did not detail whether the tests had actually been used.

Guidance on the Government website changed on April 28 to include wording saying home tests and satellite tests were being included in the counting.