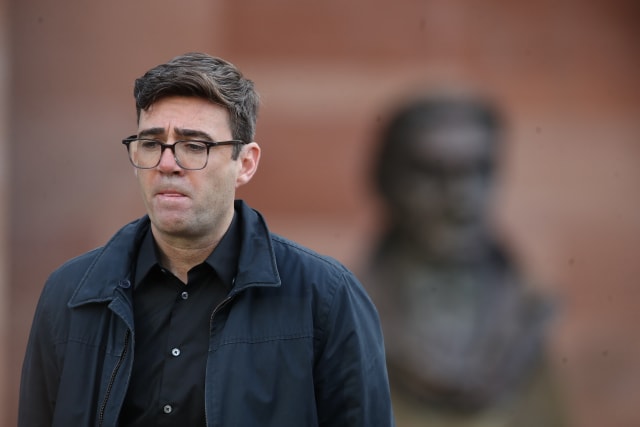 Greater Manchester mayor Andy Burnham has said there is a “clear case” for the region being eased into Tier 2 as ministers formally review the restrictions across England.

More than 34 million people, or 61% of England’s population, were living under the strictest measures after London and parts of Essex and Hertfordshire moved into Tier 3.

On Wednesday, a Government committee was to review how appropriate the tiers are for each area, with a formal announcement billed for the following day.

Mr Burnham argued ahead of the review that Greater Manchester should exit the most stringent restrictions, which would allow pubs and restaurants some freedom to reopen, but said he would understand if the Government took a more cautious approach.

He said there have been “steady decreases” across all of the region’s 10 boroughs and its average rate is around 150 cases per 100,000. This is below the England-wide average of 194.

“We are below London and below Liverpool when they went into Tier 2 originally,” he told BBC Radio 4’s Today programme.

“I accept the national mood has changed since those decisions were taken and I can also understand if the Government were wanting to err on the side of caution.

Tier 3 was imposed on Manchester on October 23 after Mr Burnham and local politicians including a number of Conservatives fought to oppose the restrictions.

They argued that firms and individuals needed greater financial support to survive the shutdown but Prime Minister Boris Johnson eventually pushed ahead without local consent.