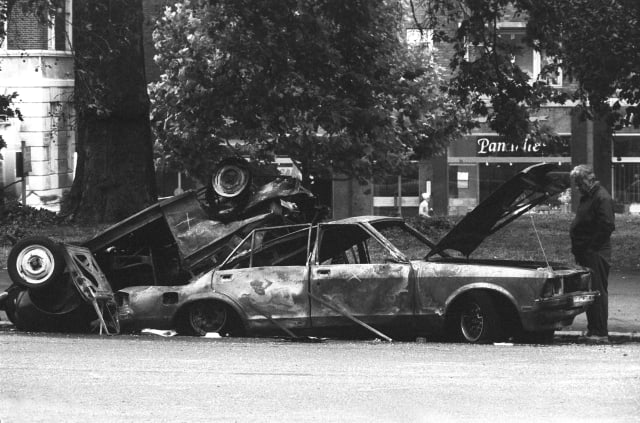 An award of “substantial damages” to “mark society’s condemnation” of the Hyde Park bombing can only be made if either Parliament or the Supreme Court allows it, a High Court judge has ruled.

Mr Justice Martin Spencer was asked at a hearing earlier this month to award “exemplary damages” because relatives of four British soldiers killed in the atrocity have been denied some “measure of justice, and thereby closure” with no-one ever been prosecuted, convicted and punished.

In a ruling on Wednesday, the judge said awarding such damages would require an extension of the law which would be “for either Parliament or the higher courts, and probably the Supreme Court”.

He said it was the first time the courts in England and Wales have considered the issue of exemplary – or punitive – damages in the context of a civil claim arising from a terrorist attack.

But he relied on a decision of the House of Lords in a case brought in Northern Ireland over the 1998 Omagh bombing, in which the law lords said it was not appropriate for them to “embark upon the radical extension” of the law needed to award exemplary damages.

However, the judge did award more than £715,000 in damages to Sarah Jane Young, the daughter of one of the soldiers killed in the blast, for the psychiatric injury she has suffered.

Family members of Royal Household Cavalry men who died in the July 1982 blast brought a civil action against convicted IRA member John Downey after a criminal case collapsed at the Old Bailey in 2014.

A High Court judge ruled last year that Downey was an “active participant” in the bombing and was jointly responsible with others for the attack, which left 31 other people injured.

At a remote hearing earlier in December, lawyers said the legal action was brought to “vindicate” relatives of victims who were unable to achieve any resolution through the prosecution and imprisonment of the bombers.

They said there should be a “substantial, punitive award of exemplary damages to reflect society’s disgust, amount to a deterrent and to mark society’s condemnation of such actions”.

Squadron Quartermaster Corporal Roy Bright, 36, Lieutenant Dennis Daly, 23, Trooper Simon Tipper, 19, and Lance Corporal Jeffrey Young, 19, were killed by a car bomb as they rode through the central London park to attend the Changing of the Guard.

Seven horses had to be put down and another horse, Sefton, survived terrible injuries.

The legal action was brought against Downey by Ms Young, L/Cpl Young’s daughter, on behalf of herself and other victims’ relatives.

Her barrister Anne Studd QC told the court that, as a four-year-old, Ms Young watched from her nursery window as her father left on horseback, never to return, before hearing the blast and seeing injured soldiers return to the Knightsbridge barracks.

At the outset of the hearing, Ms Studd told the court: “The murder of four members of the Household Cavalry on 20 July 1982 in Hyde Park, on their way to the Changing of the Guard, was a defining moment in the IRA attacks on the British establishment.

“The claimant is but one victim of those attacks but she brings this claim for assessment of damages arising from the brutal murder of her father, to vindicate herself and others who have been unable to achieve any resolution of their claims though the state’s more usual channels of prosecution and the imprisonment of those responsible.

“In their case the state failed and their situation was grossly exacerbated by the wrongful issue of an ‘on the run’ letter which resulted in Mr Justice Sweeney staying the indictment against the defendant on grounds of abuse of process.”

Mr Justice Spencer awarded £715,207 to Ms Young, most of which will go to her mother for her past care.

Following a two-day trial in December last year, Mrs Justice Yip found that Downey was responsible for moving the car filled with explosives in the days before the attack, after hearing evidence that his fingerprints were found on a parking ticket.

The judge said: “I have found that the defendant was an active participant in the concerted plan to detonate the bomb, with the intent to kill or at least to cause serious harm to members of the Household Cavalry.”

Ms Studd said he had been notified about the damages assessment taking place, but he has not responded and is not involved in the hearing.

Downey was wanted by police in connection with the blast from May 1983, and he knew he was wanted from at least October the following year, but a decision was taken in 1989 not to seek his extradition to the UK from Ireland.

He eventually faced four counts of murder and doing an act with intent to cause an explosion at the Old Bailey in 2014 in relation to the blast.

However, the trial dramatically collapsed after it was revealed he had mistakenly been given a written assurance he was not wanted in connection with the blast under the controversial “on the runs” scheme as part of the Northern Ireland peace process.