Family ‘grateful’ for Christmas with boy recovering from Covid-linked coma 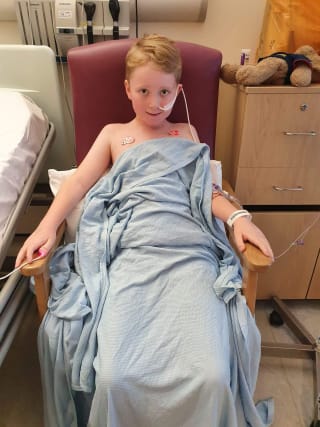 The family of a boy who developed a condition after Covid-19 which left him in a coma have said this Christmas will be one they are “much more grateful” to be able to celebrate with him.

Jack Fair spent days in intensive care after his heart began to fail and his vital organs became inflamed.

His parents Tommy and Tracey, both 51, grew concerned when he began giving strange answers to questions and rang NHS24.

It emerged he had been suffering from severe symptoms of a rare Kawasaki-like disease linked to coronavirus – his parents had the virus in October but neither of their young children displayed any symptoms.

The 10-year-old from Blackridge, West Lothian, was taken to St John’s Hospital in Livingston on November 9 so medics could assess him.

He was then taken to the Royal Hospital for Children in Glasgow where medics were forced to put him in an induced coma for five days, with a further seven days in the ward.

“He was just a normal healthy wee boy.

“I think everyone’s under the impression that children are very safe.

“People should keep in mind that they can get it – it can be really, really serious.”

Mrs Fair told the PA news agency that her son was getting better, although she worried about future complications.

She added that he would sometimes return tired from studying at Armadale Primary School – where he has been limited to one hour a day – and decided to keep him from the classroom until next year.

It will be the first Christmas the family has not spent with Mrs Fair’s parents due to coronavirus restrictions.

However, she said the fact her son can enjoy it with them has made it even more special.

She added: “It was going to be a strange Christmas anyway but I think we will all of a sudden be more grateful.

“Christmas will just be something we are more more grateful for.”