EU’s von der Leyen: There is a ‘very narrow’ path to agreement with UK 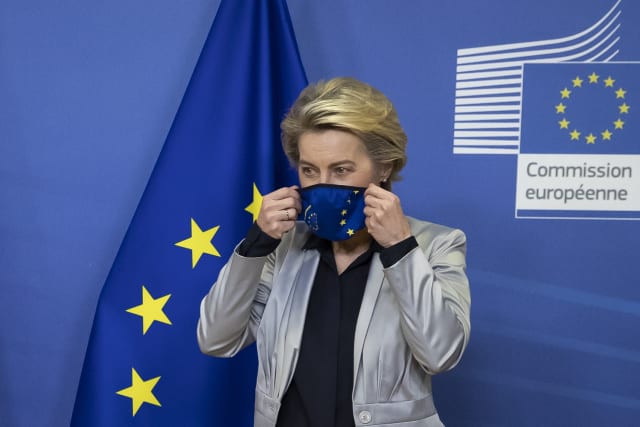 There is a “path” to an agreement between the UK and European Union on a post-Brexit trade deal but arguments over fishing rights continue, Brussels chief Ursula von der Leyen has said.

The European Commission president conceded that the route to an agreement is “very narrow” and resolution of the difficulties over fishing may prove impossible.

But she indicated that progress has been made on measures to prevent either side unfairly competing with the other by cutting standards or using state subsidies.

The coming days will be “decisive” as the clock ticks down until the end of the month when the current arrangements between the two sides expire.

Mrs von der Leyen told MEPs that could mean the EU being allowed to act in retaliation if the UK flouts subsidy rules, while there has also been agreement that Prime Minister Boris Johnson will not undercut existing common labour and environmental standards.

But difficulties remain over what happens in the future if either side changes its rules – Mr Johnson has said no prime minister could accept a situation where Brussels could automatically impose punitive measures if it changes its regulations and the UK fails to follow suit.

However it is on fishing where the two sides remain furthest apart, Mrs von der Leyen said.

She said that “as things stand I cannot tell you whether there will be a deal or not”.

On the “level playing field” – the measures aimed at preventing unfair competition – there is a need for “robust mechanisms” governing state aid and standards.

“On state aid, we have made progress based on common principles, guarantees of domestic enforcement and the possibility to autonomously remedy the situation when needed,” she said.

“On standards, we have agreed a strong mechanism of non-regression. That’s a big step forward.”

But there are still difficulties on how to “future proof” fair competition – what will happen when the two sides’ rules diverge.

On the issue of fisheries, which has a symbolic importance on both sides outweighing its wider economic significance, the negotiations remain “very difficult”.

The EU wants the UK to continue granting access to its trawlers to fish in its waters, while British vessels often depend on demand in EU markets for their catch.

Mrs von der Leyen said: “We do not question the UK’s sovereignty on its own waters.

“But we ask for predictability and stability for our fishermen and our fisherwomen.

“And, in all honesty, it sometimes feels that we will not be able to resolve this question.

“But we must continue to try to find a solution and it is the only responsible and right course of action.”

Mrs von der Leyen said “the next days are going to be decisive” with the need for a deal to be in place for January 1.

MEPs are concerned that a deal could be implemented provisionally before they get the chance to vote on it.

Mrs von der Leyen said: “The clock puts us all in a very difficult situation, not least this Parliament and its right to exercise democratic scrutiny and ratification.”

On this side of the English Channel measures are being drawn up for Parliament to sit in the days leading up to Christmas if necessary for a deal.

Commons Leader Jacob Rees-Mogg used his ConservativeHome podcast to say a deal could be rushed through both Houses of Parliament very quickly.

“You can really, really truncate the parliamentary process if necessary and if there is a will to do it,” he said.