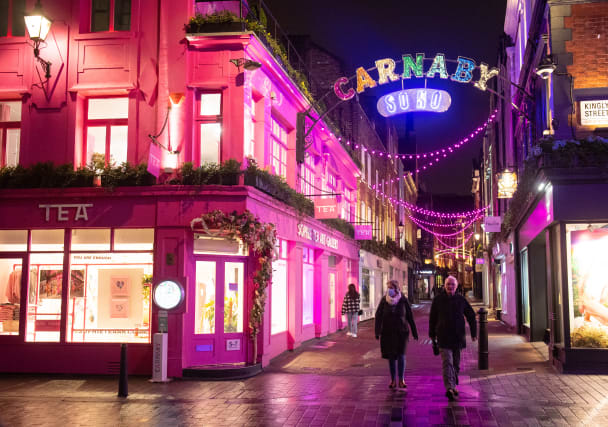 West End landlord Shaftesbury has plummeted to a £699 million annual loss after the pandemic battered rental income and caused property values to plunge.

Shares in the company, whose properties span London’s Carnaby Street, Chinatown and Seven Dials, slipped after it swung to the pre-tax loss for the 12 months to September, following a £26 million profit last year.

The company said the loss was driven by a dive in the value of property estate, which is highly exposed to retail and hospitality sectors which have been hit hard by the pandemic.

Rental income slumped by 24.2% to £74.3 million for the period, Shaftesbury said.

Footfall in central London has been significantly weaker this year due to travel restrictions, the enforced closure of shops and venues and guidance for workers to stay at home.

The update comes a day after the Government confirmed that London will move into Tier 3 from Wednesday, requiring restaurants, pubs and other leisure and hospitality venues to shut their doors to customers.

Brian Bickell, chief executive of the group said: “Rarely in history has the world seen such widespread disruption to normal patterns of life.

“Only now are we seeing the first positive signs that conditions will begin to improve in the year ahead.

“The pandemic has had a significant impact on our performance, particularly during the second half of the financial year, depriving our hospitality and retail occupiers of footfall and trade and resulting in reduced rent collections, increased vacancy, reduced occupier demand and a fall in property valuations.

“Our key priority has been, and continues to be, supporting our occupiers through this period of disruption.”

Russ Mould, investment director at AJ Bell, said: “As London prepares to enter the highest tier of restrictions it feels like a pretty bleak time to be owning West End properties.

“That is the brutal reality faced by Shaftesbury, landlord of fashionable restaurants, bars and shops in Soho, Covent Garden and Chinatown.

“Unlike some other parts of the real estate market it’s hard to see a swift recovery in valuations and rental income for Shaftesbury because of the reliance of that part of London on tourism.”